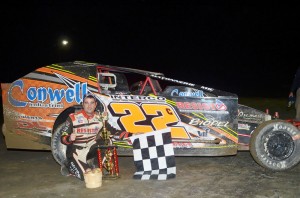 BRIGHTON, ONTARIO – September 23, 2012 – After an intense battle for the top spot at Brighton Speedway’s DIRTcar 358-Modified Series race Saturday, “Super” Mario Clair managed to take the lead with five laps to go and keep it through the checkered flag.

Chad Chevalier charged ahead of pole-sitter Erick Rudolph for the early lead in the Applefest 100, but lost it after six laps to Carey Terrance. Chevalier clung to second for almost 30 laps, taking his chance at a restart in lap 36 to get ahead of Terrance. However, Chevalier’s second time at the front lasted only a few laps, Terrance gaining momentum and passing him again in lap 39.

Meanwhile, Dale Planck made his way from the eighth starting spot to challenge Terrance for the lead in lap 42. Terrance held on for several laps against point leader Planck, but Planck won out in the end, leaping to the lead in lap 47. Clair, meanwhile, had progressed from a 13thstarting position to eighth place.

A caution in lap 56 slowed the pace for a few laps and brought Terrance closer to the top spot, but Planck fended him off at the restart and maintained his position. The next caution in lap 74 also did no harm to leader Planck, but the restart gave Clair the opportunity to charge ahead of Mat Williamson and Travis Braun to claim the third spot.

“The Natural” Planck seemed to have the Applefest 100 in the bag until a broken shock mount in lap 87 took him to the pits and left then-runner-up Clair in the lead.

However, Terrance soon passed Clair for first in lap 89, and kept the lead until lap 94, when Clair jumped ahead just in time for the checkered flag.

Rounding out the top five for the DIRTcar 358-Modified Series Applefest 100 at Brighton Speedway were Terrance in second, Braun in third, Williamson in fourth, and early race leader Chevalier in fifth. Planck was able to return to the track after mechanical issues took him out in lap 87, finishing in 13 th.

The DIRTcar 358-Modified Series heads to Weedsport, N. Y., for Round 9 at the Cayuga County Fair Speedway for the NAPA Auto Parts Super DIRT Week Kickoff presented by FX Caprara.