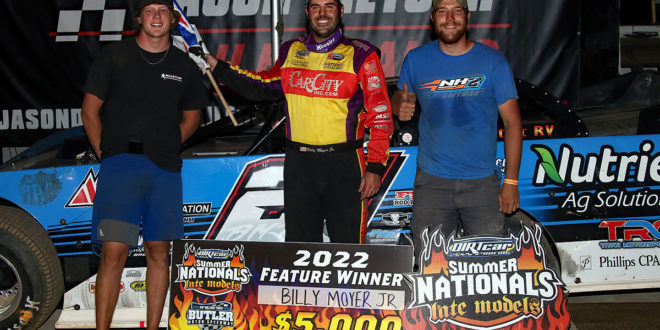 Billy Moyer Jr. has gone through his ups-and-downs racing part-time on the DIRTcar Summer Nationals trail this season, but he and his team’s hard work and perseverance finally earned them a win Thursday night at Butler Motor Speedway.

“It’s good to finally get a win; It feels really good,” Moyer told DIRTVision Pit Reporter Heather Debeaux in Victory Lane. “I love it up here in Michigan.”

He’d been as close as third and finished as far back as 22nd in 14 Summer Nationals starts this season, but Moyer stuck with it and decided to finish out the schedule in Michigan. It paid off immediately, earning the Arkansan his third tour victory in the state of Michigan in the first race of the week.

In short, Moyer dominated, leading all 40 laps en route to his 10th career Hell Tour victory and first since 2017. A threat of rain was in the area throughout the evening, forcing a hurry-up program that eliminated Heat Races from the program and instead took transfers from Qualifying. Moyer was quickest in Group 3 and redrew the outside pole, which allowed him to momentum around the top side and grab the lead at the drop of the green.

Though several caution flags flew throughout the Feature, nothing seemed to be able to break Moyer’s concentration. He fended off race-long pressure from Michigan regulars Chad Finley and Dona Marcoullier, and even a push from Hell Tour rookie Payton Freeman, who’s still hot on the trail for his first win with the schedule winding down.

On restarts, he was flawless, never once letting those behind him get a chance to make a pass for the lead. All of this, while navigating the fast, 3/8-mile oval with steering issues.

“The rack’s going out on this thing, I don’t know what was going on,” Moyer said. “I couldn’t steer the greatest. This Longhorn [Chassis] was really good, if it wasn’t for that… we probably wouldn’t have won.”

With the laps winding down, Freeman was neck-deep in a battle for fourth with Eric Spangler, which he won to come across the line with his fourth top-five in the last six races. Finley and Marcoullier held their spots on the podium, giving them each a shot of momentum heading into weekly venues Tri-City Motor Speedway on Friday and Merritt Speedway on Saturday.

The DIRTcar Summer Nationals is back in action Friday, July 22 at Tri-City Motor Speedway in Auburn, MI. If you can’t be at the track, watch every lap live on DIRTVision.