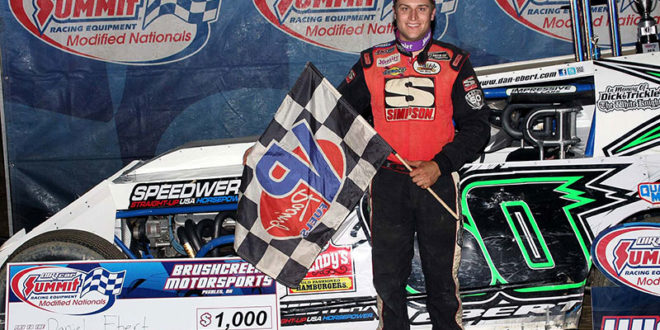 Ebert, of Lake Shore, Minn., started the 20-lap feature event from the outside of row one, with Taylor Cook starting from the pole-position. Ebert wasted little time capturing the lead as he rocketed past Cook on the backstretch of the opening lap.

Once out front, Ebert kept his car glued on the faster outside line which kept Cook from mounting a serious charge on the leader. Cook worked his way to the inside of Ebert on several occasions but could never get enough momentum to complete the pass for the lead. Unfortunately for Cook his bid for the victory would come to an early end as he tried to power his way to the inside of the leader and spun his car after trying to avoid contact with Ebert.

With Cook at the back of the field, Ebert faced challenges from Jackie Boggs on several restarts around the halfway point in the race, but Eberts car proved to be too strong for Boggs. Ebert pulled away from Boggs on a restart with four laps to go, and cruised to the $1,000 checkered flag at Brushcreek Motorsports Complex.

For the second night in-a-row, Jacob Poel was involved in an accident in his heat race, resulting in a poor starting position. Poels bad luck carried over to the feature event where he finished in the 16th position, again failing to gain ground on an absent Mike Harrison in the championship standings. With just two races remaining, Poel is still just six-points behind Harrison for the $5,000 title.