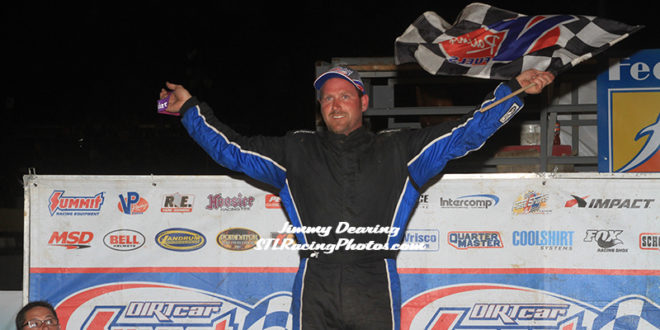 Track owner Ken Schrader, of Fenton, Mo., and Michael Long of Quincy, Ill., occupied the front row for the 25-lap feature event. Schrader rocketed around Long on the start of the race and secured the lead for the opening handful of laps.

Mike Harrison, who started just behind Schrader and Long in the third position, would not let Schrader get away from the field. Harrison ran down the leader and passed him on lap six. Harrison’s car proved to be too strong for either Schrader or Long to keep up with as he pulled away to an insurmountable lead.

Harrison would lead the remaining 19 laps en route to scoring the $1,000 checkered flag at Federated Auto Parts Raceway at I-55, defeating Schrader by .77 of a second. Harrison continues to sit atop the point standings, increasing his margin over Ray Bollinger who finished 14th.