DRUMMONDVILLE, Quebec – Sept. 9, 2011 – Joey Ladouceur continued his dominance of the early portion of the DIRTcar Pro Stock Series tour by winning Friday night at Autodrome Drummond, his second win in the first two races run of the season.

Francois Adam took to the early lead after starting on the pole.  Stéphane Larivière and Dion Oakes were running behind the
leader.  A pair of #47 drivers was in battle for fourth between Dave Bissonnette and Corey Wheeler as the feature got quickly to lap 10.

Joey Ladouceur was a man on a mission, as he moved into the top-5 from 9th starting spot on lap-12, then proceeded to make quick work of Bissonnette for third on lap-15, before passing Oakes for second by lap-17, while Francois Adam had built up a commanding lead.

It took Ladouceur just 10-laps to negate the lead built up by Adam, as he blasted into the race lead on lap-27. The caution flag flew for the first time on lap-29, giving the field another chance at Ladouceur.

The restart saw Ladouceur rebuild his comfortable lead. From there, there was no-looking back, as Ladouceur picked up the victory by a half-track lead over Francois Adam and a late-charging Francois Bertrand. .

“I really like Drummond, too bad they built Montreal between here and Alexandria,” joked Ladouceur in the winner’s circle enjoying his second win in as many tries at Drummond. “This probably the best car I have drove in my career.”

Runner-up Adam noted the strong run of Ladouceur, “Joey was too strong, but I am real happy with second place.”

Night 2 of Race Mania Weekend at Drummond is scheduled for Saturday night, highlighted by the Big-Block Modified Super DIRTcar Series. The DIRTcar Pro Stock Series will be back in Quebec on Friday, Sept. 16 as Autodrome Granby will host a special 97-lap event part of the Bob Gatien 397 evening. On the following night, the series will head to Mohawk International Raceway to complete a doubleheader weekend.

Heat Races (8 laps, all drivers qualified, and top 5 to redraw) 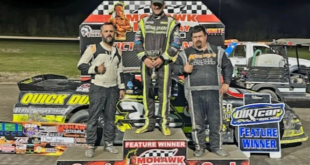