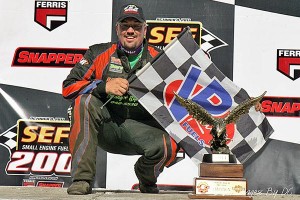 With a move to the DIRTcar Sportsman class in his plans for 2011, Gloversville, N.Y.’s Warner capped his Pro Stock career with a flourish, winning the division’s 25-mile Super DIRT Week XL headline event at the one-mile New York State Fairgrounds for the second consecutive year.

The 30-year-old standout put on a show as he came on strong late in the distance to outduel Rob Yetman of Castleton, N.Y., and Pete Stefanski of Wheatfield, N.Y., for the $2,000 top prize. He started 11th, grabbed the lead from Stefanski on lap 20 and held off Yetman over the final circuits.

“This was fun,” said Warner, who drove the West End Towing No. 79. “Last year I led all 25 laps (of the BACC-OFF Pro Stock Championship 25). This year we had to earn it big-time. We started 11th and had to pass some good cars to get to the front.”

After quietly inching his way forward during the caution-plagued first 15 laps of the feature, Warner turned up the wick down the stretch. He announced his checkered flag intentions by passing polesitter and early leader Joey Ladouceur of Alexandria, Ont., for third on lap 17 and then overtaking Yetman for second one circuit later.

Warner then began to pressure Stefanski, who had grabbed the lead from Yetman on lap 17. Warner made his move on lap 20, nosing ahead of Stefanski at the start/finish line and then turning back Stefanski’s bid to regain command through turns one and two.

“He was on the bottom and I drove in a little deeper on the top,” Warner said of the deciding moment in his battle with Stefanski. “I just got side-by-side and I knew he was coming up to try to slide us, so I actually hit the brakes coming in (to turn one) to let him go across. Then I did a switchover and came to the bottom and returned the favor back into three.”

Warner repelled one more challenge from Yetman, who got close enough to make Warner sweat on the final lap before settling for runner-up money.

“I knew Rob was close but I didn’t realize how close he was until I saw his nose coming off of (turn) three,” Warner said of the final tour. “It was an awesome race and those guys made me earn it.”

Warner was ecstatic after securing a victory at the historic Moody Mile.

“A win is a win, but when you win a great race like this it feels a whole lot better,” said Warner. “To be in the history books is awesome. Buzzie (Reutimann), (Gary) Balough, (Pete) Bicknell, (Brett) Hearn and (Billy) Decker have all won back-to-back (races) in other divisions, so to add my name to the list of guys with back-to-back wins here is special.”

Warner said he has his race-winning Pro Stock up for sale as he plots his 2012 assault on the DIRTcar Sportsman ranks. He has already proven solid in the open-wheel division this season – he owns six triumphs at Glen Ridge Motorsports Park in Fayetteville, N.Y. – and hopes to pick up the pace even more as a Sportsman regular next season.

Yetman, who grabbed the lead from Ladouceur on a lap-six restart, wasn’t disappointed about finishing second.

“It was a lot of fun out there,” said Yetman. “I really wanted to pass Joey (Ladouceur) and when we got him I thought we were in good shape, so I started easing up a little bit in the corners. Then Rocky and Pete got me through the turns so I started driving in a little deeper. I got back by Pete and thought I had something for Rocky – and I think if we had a few more laps we might’ve got him – but it was a great race.”

Stefanski, meanwhile, faded slightly after ceding the lead to Warner.

“This is our biggest race of the year and we always come here prepared,” said Stefanski, who won the event in 2009. “Anytime you come here you know it’s going to be a battle and those guys were just better at the end than me.

“The car was great early, but then we burned the tires up a little bit and I had nothing for Rocky or Rob at the end. I thought we were sitting pretty when grabbed the lead late, but those guys came right back and got me.”

Ladouceur fell short of victory in the Pro Stock Championship event once again after leading laps 1-6, but he left Syracuse Mile as the DIRTcar Pro Stock Series points leader.

“We will win one of these races,” asserted Ladouceur. “Every year we come here and are always fast but just can’t quite put it together.

“It was a great points day, though, and gave us some momentum heading into Brockville (Ontario Speedway) next week. Hopefully we can put it together and bring home another (DIRTcar Pro Stock Series) championship.”

Six caution flags slowed the event, all during the first 15 laps.

The most noteworthy incident of the feature was a lap-14 homestretch tangle involving Roch Aubin of Alexandria, Ont., and Corey Wheeler of Cornwall, Ont. Their tangle boiled over to pit road, where they banged together and were banished from further action.