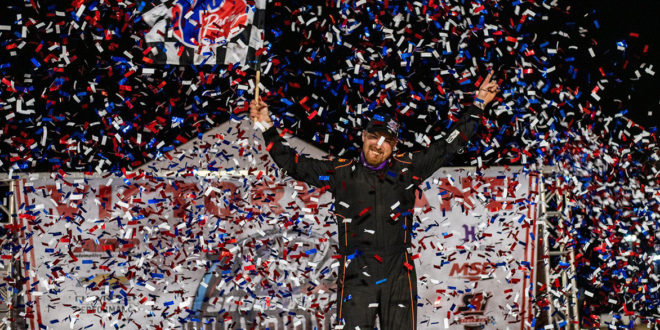 For the second night in a row at the World Short Track Championship, the DIRTVision Hornets saw two veterans rise to the top and another first-time winner at The Dirt Track at Charlotte.

The paths to their victories became highlights of the weekend with each 15-lap DIRTVision Hornet Feature producing eye-widening action to conclude the 2022 edition of the event.

Here is how each Feature played out…

FEATURE #1
When the first DIRTVision Hornet Feature of the night officially commenced, the entire field fanned out into Turn 1, scattering three and four wide.

Daniel Wright led, but was under attack by almost the entire top-five, including Ricky Weaver who made a charge on the start from third to underneath Wright for the lead.

Behind them, John Windham was the kid who brought a time machine to the science fair, warping his way from 13th to the top five in the opening lap.

On Lap 2, riding the low line, Windham powered his way by Weaver and Wright down the backstretch with ease to claim the lead and never look back. Eddie McGrew followed Windham through the opening and also passed the two drivers to move into second.

“I saw [the low line for the lead] open and decided to take it,” Windham said. “It was getting a little hairy at first, so I was trying to get out of there before I got my car tore up.

A caution on Lap 3, halted Windham’s pace and gave McGrew a chance to try and mirror the #65 car’s pace. But when the race resumed, Windham picked up where he left off and darted away.

By the end of the Feature Windham had a 5.2 second lead over McGrew to earn his fourth DIRTVision Hornet World Short Track Championship victory.

“We’re happy with his,” Windham said. “It’s a new car. We’ve ran it four time now and it’s getting better each time we drive it.”

FEATURE #2
Chaos ensued on the start of the second DIRTVision Hornet Feature of the night. No position was safe.

The entire field looked like puzzle pieces arguing where they belong.

Dustin Miller, who started on the pole, fell to ninth on the opening lap. CJ LaVair, who was on the outside pole, tried to escape the mayhem, taking the lead from Miller. However, behind him, Newman Presnell was on the move from 11th.

Maneuvering his way through traffic, as if he’d designed the obstacles himself, Presnell found himself in second on the first lap. And with nothing stopping him from keeping that momentum going, passed LaVair on Lap 2.

“It was a little wild,” Presnell said. “I stayed on the bottom, and I could tell I had a little momentum and could stay on the bottom and get by them there. I didn’t know exactly what was going to happen. It got a little wild watching them there. But I had a good car. It was dialed in. Bottom, top, it would go anywhere.”

The field then spread out and Presnell pulled away to about a three second lead.

A caution on Lap 8, brought the field back together and reminded LaVair what Presnell’s rear bumper looked like. But when the race resumed, the view became short lived as Presnell gapped the field by seconds every lap.

He ended the Feature with a 5.6 second lead over Wayne Taylor, who moved past LaVair for second in the closing laps of the race.

The victory is his fourth straight World Short Track Championship win as he also won back-to-back races at the event last year.

“It feels pretty good,” Presnell said about his accomplishment. “Right now, we’re undefeated here with this car… Hopefully we can continue this momentum into next year. It’s fun to come here to Charlotte.”

FEATURE #3
The final DIRTVision Hornet Feature Saturday night maintained the theme of early battles for the lead with Brad McManus and Cale Deese dueling for the top spot in the opening laps.

The two drivers ran side by side the first lap before a caution ended their battled. When the green flag flew again, they made sure to resume that battle by racing side by side into the first turn before Deese edged ahead.

He held the top sport for four laps before Dan Benson’s charge forward found Deese’s #35 car. Benson dove under Deese into Turn 3 and took the lead off Turn 4. However, Deese had the better run down the front stretch and returned the favor, diving under Benson into Turn 1.

Benson proved to have the better car, powering ahead of Deese of Turn 2 and gaining distance the further he got down the backstretch.

With no cars in front of him, Benson then cruised to his first World Short Track Championship DIRTVision Hornet victory.

“Oh man, it feels incredible,” Benson said in Victory Lane, while shaking with joy. “I have to thank my family and my sponsors. That’s what got me here. I’m a loss for words. I don’t even know what to say.

“The car was fast. The corners seemed slick, but I just adjusted and kept it out front.”