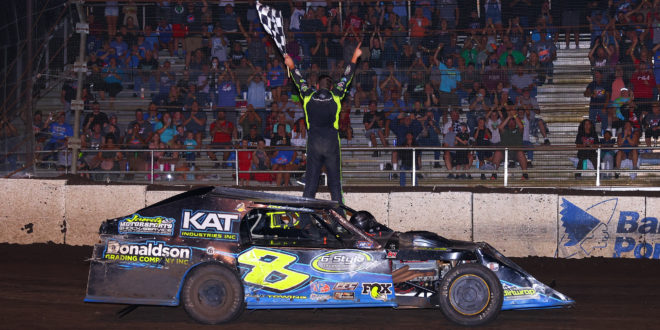 Since his first encounters with the DIRTcar UMP Modified over 15 years ago, Kyle Strickler has enjoyed a fruitful career behind the wheel with wins in multiple high-profile events at tracks across the nation. But there remained one prestigious venue he’d yet to conquer – Fairbury Speedway.

In one of the most intense, back-and-forth UMP Modified battles seen this season, Strickler defeated rival Josh Harris in an epic duel for the lead in the closing 20 circuits of the 50-lap grind to claim $10,000 and his first career FALS Super Nationals Modified title.

“It’s awesome to get $10,000, but it’s also awesome to get a win here at Fairbury,” said Strickler, of Mooresville, NC. “This place is one of my favorite racetracks in the country.”

While Strickler had solid results earlier in the evening, including a second-fast effort in Group 2 Qualifying and a win in Heat Race #5, Harris was forced to dig from further back. Harris, the veteran racer from Utica, KY, finished two spots behind Strickler in the Heat and transferred into the big show, but took the green from outside Row 8.

In the opening laps, Strickler stayed patient and ran securely inside the top-three, while Harris flipped on the nitrous. By Lap 10, he was riding 10th and looked to be on the fast-track to the front, until the surge temporarily went flat.

Over the next 10 laps, Harris advanced only one position. Before the race’s first caution was thrown on Lap 22, Harris sat ninth in the running order, looking for a bigger shovel to help him dig through the rest of the top-10. He found it almost immediately, jumping a whopping four positions on the race’s second restart two laps later to break into the top-five.

Now riding fourth, Harris saw Strickler right in front of him with polesitter Cole Falloway and three-time FALS Super Nationals winner Mike Harrison leading the field. Harrison had passed Falloway for the lead on the Lap 23 restart but broke a J-bar component after contact with the Turn 1 wall two laps later and retired to the infield.

Strickler and Harris made their way past Falloway for the lead by Lap 30, and soon after, the battle was on.

Harris struck first with a pass for the lead on the bottom on Lap 33; Strickler returned the favor to lead Lap 34. Harris beat him to the line to lead Lap 36; Strickler regained momentum on the cushion to lead Lap 37. Back-and-forth the two swapped the lead – a total of six times before all was said and done.

After Strickler caught the outside wall a bit too hard on Lap 38 and allowed Harris to pull ahead, Strickler was able to pull it back together and motor back around Harris one final time with six-to-go. A slight sprinkle of rain was falling on the track in the second half of the race, adding a touch of extra moisture, which Harris said may have hindered his plan.

“I was really good through the black, and then the rain started falling and I had to get into some traction – it made that black real greasy,” Harris said. “That made the top come back in, which was where [Strickler] was running.”

Still riding the outside wall, pounding the signature FALS cushion, The Highside Tickler was able to hang on to the lead in the final laps and drive it across the line for his first Feature win of the season in Fairbury’s richest UMP Modified event.

“It feels so good to come out here and put on a show for the fans,” Strickler said. “It doesn’t get any more Fairbury than that right there. The place was going crazy; it was so much fun to be a part of it and the most fun I’ve had in a racecar all this season.”

In Victory Lane, the two racers shared smiles and a sincere handshake, congratulating one another on their great finishes. It was an important moment for both racers, who treated the Fairbury crowd to one of the cleanest and most exciting races all season.

“I said, ‘I really appreciate you running me as clean as you did,’” Strickler said in his conversation with Harris. “It’s easy to come off that bottom and just go right to the fence and not leave that guy a lane. So, I really appreciate that. There’s a lot of respect between both of us.”

“I’ve got a lot of respect for Kyle, racing with him the last few years before he went Late Model racing,” Harris said.

Tyler Nicely came from seventh to complete the podium, while fellow Elite Chassis driver Will Krup completed the top-five with Falloway, who fell back to fifth. Harrison, who led three laps before breaking, was credited with a 21st-place finish.