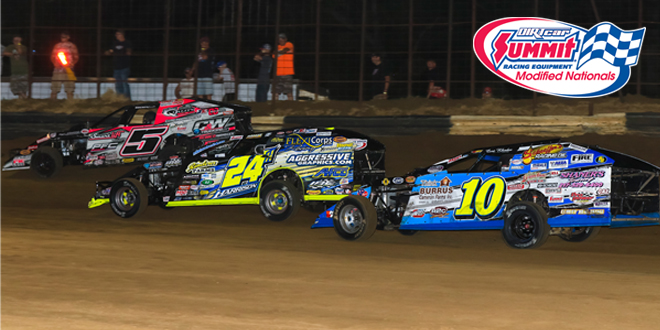 CONCORD, NC — Dec. 7, 2017 — For the eighth consecutive year, the cars and stars of the DIRTcar UMP Modifieds will join the most grueling and intimidating tour in short track racing. The Summit Racing Equipment Modified Nationals will mirror the DIRTcar Summer Nationals Hell Tour in 2018 by joining their DIRTcar Late Model counterparts for 28 races in 32 days in seven states. Then the Modifieds will conclude their own version of the Summer Nationals with five additional events held as part of the 29th annual Prairie Dirt Classic at Fairbury American Legion Speedway on Friday-Saturday, July 27-28, 2018. The top Modified drivers in the country will chase after a minimum of $1,000 each night and a $5,000 prize for winning the 2018 Summit Modified Nationals Championship as well as bonuses and contingencies totaling almost $50,000.

The second week of Summit Modified Nationals competition starts at Belle-Clair Speedway, followed by trips to Jacksonville Raceway, Spoon River Speedway and Tri-City Speedway on Tuesday-Friday, June 19-22. On Saturday, June 23, the track that has hosted the most races in the tour’s history, the popular Fairbury American Legion Speedway is next. This event will be the 15th race in Summit Modified history and first of six in 2018. The second week ends on Sunday, June 24 with a trip back to the Hoosier State and the milestone 10th all-time race at Tri-State Speedway

The third week of the Summit Modified Nationals starts on Tuesday, June 26 at Charleston Speedway. Then for the first time since 2013, Paducah International Raceway, located just south of the Indiana/Kentucky state line in Paducah, KY returns to the Summit Modified schedule on Wednesday, June 27 for the lone trip to the Blue Grass State in 2018. Also returning to the schedule, after a year off, is LaSalle Speedway on Thursday, June 28. Then it’s right back to Indiana on Friday, June 29 at Terre Haute Action Track. On Saturday, June 30, the month ends with the long trip to the Show Me State for the fifth time in Summit Modified history at Federated Auto Parts Raceway at I-55. The third week ends on Sunday, July 1 with the fifth all-time race at Lincoln Speedway.

“Coming off a thrilling end to the 2017 Summit Racing Equipment Modified Nationals tour, we can’t wait to get the 2018 tour underway,” said Summit Racing Equipment Motorsport and Events Manager Jim Greenleaf. “The grueling test that it takes to run this tour is one thing but to have the level of competition to go along with it is a true testament to DIRTcar UMP Modifieds.”

The Summit Modified Nationals roll into the fourth week of competition with the lone Volunteer State invasion on Tuesday, July 3 and the fifth all-time appearance at Clarksville Speedway. The next race will see the Summit Modified Nationals celebrate the United States of America’s 242nd birthday with the eighth-ever event at Fayette County Speedway on Wednesday, July 4. Next on the schedule is Thursday, July 5 at Macon Speedway, while Farmer City Raceway is on Friday, July 6 with the sixth ever appearance there. On Saturday, July 7 the road weary teams will head to Highland Speedway for the seventh-ever race there. Week four concludes on Sunday, July 8th with the fifth-ever Summit Modified race at Quincy Raceways.

The fifth week of the Summit Modified Nationals starts with the tour’s first-ever appearance at Shadyhill Speedway in Medaryville, IN on Tuesday, July 10. Then the next night, Thunderbird Raceway in Muskegon, MI will try again to host its first-ever Summit Modified Nationals event on Wednesday, July 11. In 2017, the originally scheduled first-ever Summit Modified race at the 1/3-mile circular shaped/semi-banked dirt oval located along the Lake Michigan shoreline, was rained out. Then it’s time for the traditional doubleheader weekend at Oakshade Raceway on Friday-Saturday, July 13-14 with the milestone 10th (Friday) and 11th (Saturday) all-time appearances.

To see the full schedule and for more information about the 2018 Summit Racing Equipment Modified Nationals, visit modifiednationals.com. You can also follow the tour throughout the off-season and into race month by visiting the DIRTcar Summer Nationals social channels. Just search for “Summer Nationals” on both Facebook and Twitter for the very latest updates. Every night of the 2018 Summit Racing Equipment Modified Nationals, the DIRTcar UMP Modifieds will be joined by the headlining DIRTcar Summer Nationals Hell Tour for DIRTcar Late Models. Information on the Late Models can be found at: thehelltour.com