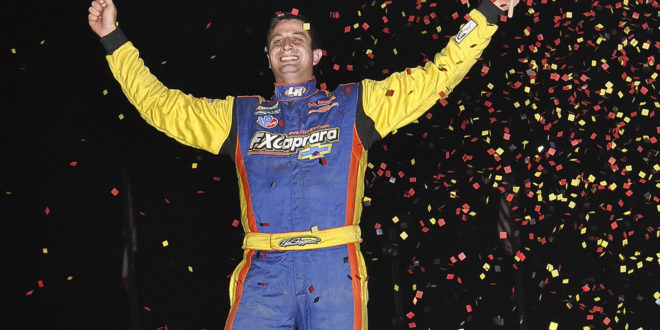 THOROLD, ONTARIO – May 21, 2013 – In a brilliant feat of showmanship, “Super Matt” Sheppard outmaneuvered Danny Johnson to win the first race of the 358-Modified Series Monday, May 20, at Merrittville Speedway.

Sheppard spent the second half of the 100-lap event fighting lapped traffic, but his ability to deftly steer his FX Caprara/Xtreme Lubricants 9s around and between cars kept him out of reach of Johnson’s challenges.

“I just wanted to run as hard as I could for 100 laps and try and get through the lapped traffic cleanly, but as quickly as I could too,” said Sheppard, who had no idea from his driver’s seat that Johnson was just a few car lengths behind the whole time. “I didn’t know if there was anybody right on me or not.”

The winner of an unprecedented three consecutive Super DIRTcar Series Championships typically sticks to the Big-Block Modified tour, but traveled to Merrittville from his Waterloo, N. Y., for the first race of the series after Monday’s postponement at Cornwall. Some of the best drivers in both divisions made the trip to Merrittville to show off their skills in a small block.

Jimmy Phelps, of Baldwinsville, N. Y., and Johnson, of Rochester, N. Y., started the feature in the front row with Sheppard just behind, fourth on the grid. Phelps, fueled by momentum from his heat race win, leapt forward at the green flag, speeding ahead of polesitter Johnson. Surviving two cautions and double-file restarts, Phelps ran strong the first quarter of the race, but not as strong as Sheppard, who passed Phelps for the lead in lap 24.

Sheppard kept his lead the remainder of the race through another two cautions and double-file restarts. The final 58 laps of the race went caution-free, creating added challenge for the leaders as they reached lapped traffic. Darting around and between cars, sometimes three at a time, Sheppard stunned crowds in the packed grandstands with his agility.

“I could kind of pick and choose myself through lapped traffic and move around a little bit, and just hold on until the end,” said Sheppard, who attributed his success to his preference for the track. “It’s just been an unbelievable track for us,” he said.

Johnson made several attempts to claim Sheppard’s lead in the last laps of the race, but could not find that outside groove that helped Sheppard cruise seemingly effortlessly around lapped cars.

“I just got caught on the bottom and I needed to be on top. I lost the lead, and once I lost the lead, I couldn’t regain it,” said Johnson, who finished second. “It just wasn’t meant to be. It is what it is, and we’re real happy with what we’ve got.”

Early race leader Phelps fell to Johnson’s advances after lapped traffic slowed his pace in lap 68. The Baldwinsville, N. Y., native kept up with the pack and finished third at the checkered flag.

“We were good. We needed more gear there at the end – the pace slowed down and we couldn’t carry as much speed,” said Phelps. “Other than that, I thought we were close, we just needed to de a little better staying with the front two.”

The DIRTcar 358-Modified Series heats back up again in July for the Ransomville Speedway’s 4th Annual Battle at the Border Wednesday, July 3.

As of 6:30 p.m., the following teams have registered for the DIRTcar 358-Modified Series race at Merrittville: