358-Modified Series Gears up to Take On Merrittville Speedway

WEEDSPORT, N. Y. – May 8, 2013 – The DIRTcar 358-Modified Series revs up north of the border with back-to-back races at Ontario tracks. The series opens Sunday, May 19, at Cornwall Motor Speedway in Cornwall, Ontario, and heads west to take on the 3/8-mile clay oval at Merrittville Speedway in Thorold, Ontario. 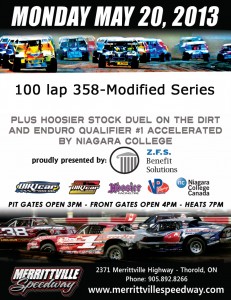 D-Track Debut: Round 2 at Merrittville

The excitement won’t end Sunday, with 358-Modified Series racers wheeling southwest from Cornwall to take on the challenging Merrittville Speedway in Thorold, Ontario, the very next day. The Monday, May 20, race night, presented by Zavitz Financial Strategies & Employee Benefits, features a 100-lap DIRTcar 358-Modified Series event plus a Hoosier Stock duel and the first Enduro Qualifier.

Track owner and 23-time 358-Modified Merrittville track champion Pete Bicknell said that even the series’ best have their work cut out for them on the D-shaped 3/8-mile banked clay track.

“It’s probably one of the hardest tracks to figure out because turn 4 is so tricky,” said Bicknell, whose experience at Merrittville and in the 358-Modified division has earned him the nickname “Mr. Small Block.” “It just takes experience. It takes lots of laps to figure out. It’s something that very few people can come and adapt to right away.”

On his way to proving that mantra is Merrittville’s own Mat Williamson. The 6m pilot collected six top-five finishes out of 12 starts in last year’s DIRTcar 358-Modified Series to finish second in points. In track points at Merrittville, Williamson fell just 14 points of the top spot – held, of course, by Pete Bicknell. This year the 23-year-old Williamson is at it again, already first in track points and ready to take on the series.

“I’m pretty excited to have a 358 race start off the year at my home track,” Williamson said. “Hopefully we can get in a good run at home and start campaigning on the series in the points battle.”

After a successful 2012 season at Merrittville plus success last year at Cornwall making  two top-five finishes out of two starts, Williamson hopes these first series races at a couple of his strongest tracks will fuel some momentum going into the DIRTcar 358-Modified Series.

“We run good at Cornwall,” Williamson said. “I don’t think that we can go there and go to Merrittville and not have a good couple nights on the series. We’re still looking for our first series win, so hopefully between those two races we can get it.”

Williamson, of St. Catharines, Ontario, said he is also looking forward to some Big-Block Modified shows, and is preparing several Super DIRTcar Series events. Last year, he racked up one top-five finish and two top-tens out of his two starts in the Big-Block Modified tour. Nonetheless, he said the small block still takes precedence in 2013.

“We’re going to kind of see where we’re sitting in points,” Williamson said. “We were going to see if we could solve both series, but there are some conflicting dates so that’s where we’re going to focus on the 358 tour.”

For the second race of the DIRTcar 358-Modified Series, pit gates open at 4 p.m., front gates at 5:30 p.m., and racing begins at 7 p.m. For more information, visit the track website at www.merrittvillespeedway.com or call (905) 829-8266. For the latest news about Merrittville Speedway, follow the track’s Twitter updates, @Merrittville, and “like” the Facebook page, www.facebook.com/groups/merrittvillespeedway.

For the latest news and updates about the DIRTcar 358-Modified Series and the other DIRTcar Northeast traveling tours, including the Super DIRTcar Series, follow @DIRTcarNE on Twitter, “like” the DIRTcar Racing Facebook page, www.facebook.com/pages/DIRTcar-Racing/286953054655394. The full DIRTcar 358-Modified Series is available by visiting www.dirtcarump.com/schedule/10844-2.