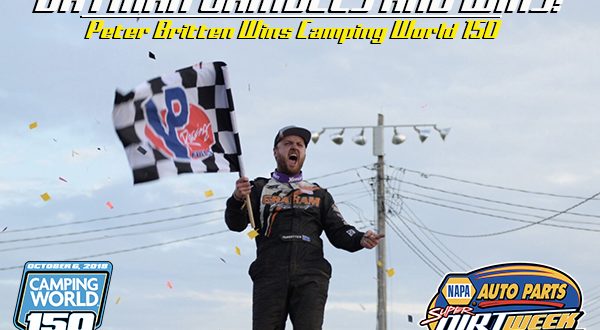 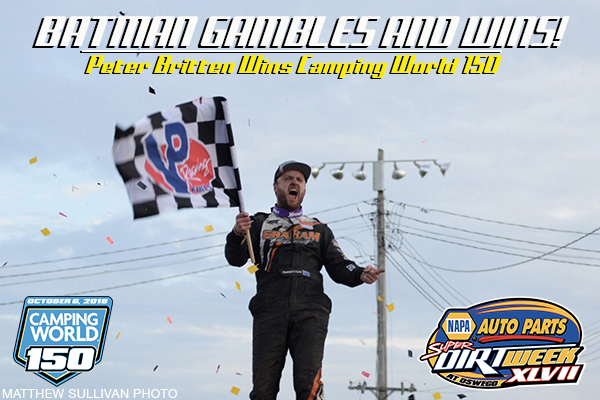 OSWEGO, NY – October, 6, 2018 – Batman Peter Britten took advantage of the new competition pit stop to win the Camping World 150 for the DIRTcar 358 Modifieds. Giving up his top 10 running position on track, Britten came down pit road on lap 100 to take fuel and a new right rear tire and then drove from position 22 to the lead to collect the $20,000 check.

“This feeling is just awesome,” Britten said. “We learned last year that you have to make sure your car is there at the end and we had it today.”

Tim Fuller and Erick Rudolph led the 40-car field to the green flag. Fuller led the first nine laps of the event before Mat Williamson took over on a lap nine restart.

Larry Wight showed early speed while working from his tenth place starting spot into fifth by lap 16. Wight’s speed continued on the outside of the track as he worked to third by lap 21 and had second by lap 36.

Williamson faded and Fuller had the lead back at lap 50 over Rudolph, Stewart Friesen, Wight and Williamson.

Friesen found life on the extreme outside of the track as he fought his way to the lead on lap 59. Fuller faded back to third as Rudolph worked around to take over second. The front of the field ran single file until Lance Willix’s flat tire brought out the caution on lap 69.

Seven drivers came down pit road to take fuel and tires. The most notable driver taking advantage of the opportunity was Pat Ward, who was running in the middle of the field.

Gary Lindberg stuck his nose inside the top five for the first time on lap 79. Friesen, Wight, Rudolph, Lindberg and Ronnie Davis III ran in the top five until the competition yellow that was thrown on lap 97.

Williamson and Britten were both running inside the top 10 when they elected to roll the dice and take advantage of the competition yellow. Eight other drivers came to pit road for fuel and tires. The top five drivers on track all elected to maintain their positions.

The field returned to green on lap 106 with Friesen driving out to the lead. Lindberg and Hearn restarted on the outside and instantly powered forward off the second turn. Lindberg worked to second and Hearn cracked the top five for the first time on the day as he worked into third. By lap 108, Hearn worked over Lindberg for the second spot, but had a large gap between himself and Friesen. Ward slid into the top five on lap 111 and the caution flag flew on the following lap.

Friesen continued to lead, but Britten was making a charge through the field and worked to the second spot by lap 135. The ensuing restart was single file, allowing Friesen to run whatever line he wanted into the first turn. Britten stalked all over the back bumper until he was able to get a good run off the fourth turn to complete the pass on lap 143.

Britten pulled away to a comfortable margin of victory, while Friesen easily hung onto the second spot. Sheppard rallied late after restarting in position 27 on lap 118 to complete the podium. Hearn and Rudolph finished fourth and fifth, respectively.

“We have been too stubborn with our pit strategies,” Sheppard said. “We should’ve pitted earlier but I’m definitely happy to come home with a podium finish after restarting from way back in the field.”

Ward, who faded in the final 15 laps ended up sixth with Billy Dunn, Lindberg, Kenny Tremont Jr. and Davis III rounding out the top 10.