Bobby Herrington Races Back To The Books Preparing For ’09 Openers

Bobby Herrington has a thirst for knowledge. As the shrink-wrap comes off 2009 calendars, the Elginburg, Ontario teen – a 12th grade student at Sydenham High School – is pouring through notebooks and journals. The 3rd year DIRTcar 358-Modified racer is making a list of words that will help define the renewed sense of optimism that he hopes to bring to his racing program in the new season.

“It’s no secret, as a team, we struggled in 2008,” Herrington said with a smile. “We know we can do better and the new season will be a chance to show our stuff. We’ve picked up a new Bicknell chassis and while we were there, had the chance to pick the brain of Randy Williamson. The Bicknell folks have been great partners for a number of years and we’re proud to be running their equipment again in ’09. Randy gave us open access to their shock adjustments and set-up notes. We’ll have the same car and set-ups as Pete Bicknell this year.”

Herrington confirmed they’re already taking the steps needed to get the car ready for the new season and is sure many of the marketing partners that were on-board in ’08 will be back, with some new supporters still to come. The 17 year-old thinks they’ll be back at their two regular home tracks for the 2009 season. Depending on how things go early in the year, fans could even expect to see the #25 DIRTcar Small-Block Modified entering some of the extra distance special events and maybe even some of the Mr. DIRTcar Series stops.

“There have been so many rumours flying around during the off-season, it’s hard to know what to believe,” Herrington remarked. “I’d like to get back to Edelweiss and Brockville this year. I think we have some unfinished business where each venue is concerned. Some of the on-line forums have even talked about an early season tour show at Edelweiss. We’ll just have to wait for the official schedule announcements and separate the fact from fiction. If we start the season well at the early Super DIRTcar shows, we’ll probably do some more touring.”

Paint-scheme plans for Herrington’s 2009 Bicknell SB Mod are on the drawing board and the team has its primary power plants – a Kevin Enders prepped Chevy and a DSE 358 out of Dale Stroud’s shop – back from being freshened and the countdown to the season openers is underway.

“I think we’re ready to go racing and if the season was to start tomorrow, we’d be there and quite competitive,” added the young speedster. “2007 was a great season, but every racer has bumps in the road. We can get back to that level. It’s all about attitude and we’re heading into the new season with a positive state of mind.” 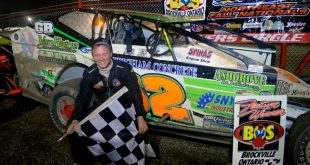