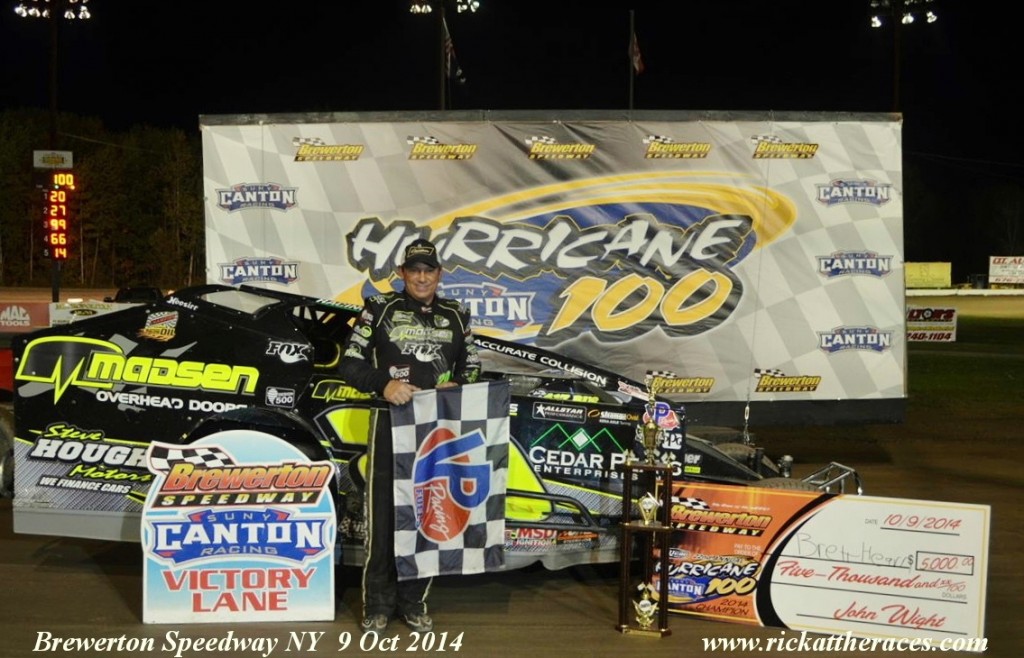 “It feels good. It’s been a while since we’ve been this good here at Brewerton,” said Hearn, who lead all 100 laps in Thursday’s feature race. ”I found a line early that I thought was working for me, I stayed out of the black, and I think that was key.”

Hearn drew the pole Thursday and took off at the green flag with the initial lead. The first caution came early as several cars, including the No. 21k of Randy Chrysler, the No. 3B of Chad Brachmann and the No. 71 of Mike Bowman, collided in lap 3. The field returned to green in lap 10, but was quickly back to yellow in lap 11.

Johnson, who started fifth on the grid, was capitalizing off the stop-and-go action and had made his way to third. Soon after the next restart, Johnson rode on the heels of Ryan Susice in second, taking the position in lap 19. Hearn had pulled away from the field, but Johnson charged ahead, hoping to have a go at his longtime rival.

A lap 31 caution for Yan Bussiere, whose No. 21 spun in turn 2, brought the field back together for a restart. Hearn and Johnson restarted from the front row, Hearn selecting the inside group. Hearn was able to stay ahead, but Johnson wasn’t as strong at the green flag and lost a position to Jimmy Phelps in the No. 99J.

However, Johnson gained momentum after a few green laps, and sought revenge on Phelps. He reclaimed second from the Baldwinsville Bandit in lap 41 and set his sights on Hearn.

The pace slowed again in lap 47 as the yellow flag waved for Lance Willix III. Hearn kept his spot on the restart and by lap 60 was speeding into lapped traffic when caution hit the speedway again in lap 68. Off the next restart, a midfield pileup in the front stretch brought a prolonged caution period as track crews cleared the wreck.

Racing resumed in lap 75, and the last quarter of the race wasn’t without its challenges for leader Hearn. The yellow flag waved in lap 77 for Zach Aubertine stopped in turn 4, giving Johnson another opportunity to challenge for lead off the restart. However, Hearn held on through that restart, as well as one in lap 80 after Chad Brachmann’s No. 3B slowed to a spot. In lap 93, the No. 71 of Mike Bowman brought the last caution of the race. Johnson charged ahead at the restart, putting all his will into overtaking Hearn in the last 7 laps, but Hearn’s No. 20 stayed ahead to claim victory.

“You don’t mind the yellows when the laps are counting, but when they’re not counting it’s a little longer,” commented Hearn, who admitted to having some trouble in lapped traffic on the one-third-mile “D-Shaped Dirt Demon.” “The lapped cars were tough at times. They were wandering around and you didn’t really know where to go.”

After many unsuccessful challenges for the lead, Johnson finished second, fending off advances from Phelps.

“I had a great hotrod,” Johnson said in post-race ceremonies following the feature event. “I’m really happy that we’re here in Victory Lane, getting up on the podium and talking to all the fans.”

Phelps finished third and, while he would have preferred the win, was glad for a podium finish.

“We just missed it a little bit. We practiced a little choppy, and the bite just didn’t go away like we thought it would,” Phelps said. ?We started up front with some really good guys, so we’re not disappointed with third.”

The main events on Saturday include the USAC Silver Crown “Salt City 78” at 1:30 p.m. followed by the “Salute to the Troops 150” for the 358-Modifieds. On Sunday, the DIRTcar Sportsman and Pro Stocks will compete before the premier Syracuse 200 for the Super DIRTcar Series Big-Block Modifieds takes the green flag at 2 p.m.