Todd Burley is the two-time defending Small-Block points champion at Ransomville Speedway and captured the overall Hoosier Tire Mr. DIRTcar Sportsman title in 1992. Next up for the Spencerport, New York racer may be the coveted Mr. DIRTcar 358-Modified Championship, a crowning achievement in a career that has already spanned more than two decades of success on the DIRTcar Racing NorthEast circuit.

“I’d like to win the Ransomville title again and a top-3 in the Mr. DIRT race would even be okay,” said Burley, 37, who currently ranks second in both point hunts as the regular season counts down at DIRTcar tracks throughout the region. “Experience is everything and we’ve been around long enough to have a shot now.”

“There’s a big learning curve when it comes to running on the road. You have to figure out a lot of new places and gain some track knowledge, then find out who you can race with. Starting out I always tried to run along with the full-time racers, they needed to cut a pay check every time out so they didn’t wreck. Having good enough equipment to get the job done is also important if you want to make it through the whole season and have a chance at the end,” remarked Burley, who has every facet of the game covered now in his 2008 short-track campaign strategy.

Also a DIRTcar Big-Block Modified regular this season at Canandaigua Speedway on Saturdays, Burley finished fifth in overall Mr. DIRT 358-Modified Championship points in both 2000 and ’01, placing 16th last year after recording a pair of top-fives in just three tour starts. The ‘Tornado’ garnered his first DIRTcar 358 track title at Utica-Rome in 2001 and has parked in victory lane on 52 occasions, including four times —all at Ransomville— in 2008 Small-Block competition.

“Guys like Pete (Bicknell) and Danny (O’Brien) have been on the road before and can win any time, and if Dale (Planck) was following this whole series he would be the man to beat,” figured Burley, who trails Advance Auto Parts Super DIRTcar Series Big-Block runner-up Planck by just five markers in the 358-Modified Series point standings after two events. With four wins each on the homefront, Burley and Bicknell are separated by a single point at Ransomville after Todd’s mount suffered a broken spindle last Friday.

Planck copped the tour opener at Merrittville (Ont.) Speedway and followed up with third-place in the Ransomville ‘Summer Nationals’ while Burley settled for fourth on Canadian soil and returned stateside to claim the $6,800 top prize on the ridge. Both will be chasing a $4,000 winner’s share when the Mr. DIRTcar 358 Championship Series arrives at Mohawk Int’l Raceway for the Akwesasne 100 sponsored by the Mohawk Bingo Palace and Casino on Thursday, August 21.

“I expect Dale to be strong again at (Mohawk) where he’s won a couple times and the track regulars are always contenders on hometurf. I remember the place being fast and dark, and I know the track is a lot different than what we race on closer to home. The surface is almost too fast, its always heavy. You run out of tear-offs after lap 20 and it doesn’t start drying out until 40 laps are in. It’s a 100 laps so being up front at the end will be just as important as getting there,” Burley noted.

Sporting his familiar blue & white Bashore Trucking no. 5 New York Pizzeria/Bicknell ride in the initial tour events and throughout the season, Burley plans to transplant his JanCen 358 cubic-inch powerplant to the orange no. 89B BRP entry that is recognized weekly at Canandaigua in the Big-Block ranks. After Labor Day, he expects the no. 5 car to carry him the rest of the way through the Eastern States Weekend finale at Orange County Fair Speedway in October.

“I’d like to take the number five car to Mohawk but I want to save it for Ransomville,” said Burley, who ranks third all-time at Ransomville with 27 DIRTcar 358-Modified feature wins. “I still need some bonus points towards the Mr. DIRT title and only have a couple weeks left to get it done. I had the lead there all season and wouldn’t you know it, I break and Pete wins and now I’m behind … what are the odds?”

But don’t lay out any odds too early against Burley, who has also won at Mohawk —known as Frogtown Int’l Speedway— when he scored a Mr. DIRTcar Sportsman Championship trail victory in 1994. His first two 358-Modified tour wins were both taken on foreign soil when he won a pair of century grinds in 2000 at Autodrome Edelweiss so he’s comfortable shaking up new ground.

“I think I have as good a shot at winning as most of the top teams,” added Burley, now a father of two children, Allison (3 yrs.) and Spencer (15 mos.) with fiancee Valerie, and co-owner of Fine Line Fabrication with his shop located in Byron, New York. The Spencerport native entered the DIRTcar Sportsman class at Canandaigua Speedway in 1991 following a successful go-cart career that was highlight by the 1989 World Karting Association (WKA) Grand National Championship.

“I’m probably a little more laid back now with the kids and I cut back the schedule but it’s the weather that’s hurt everybody around here the most. Running the Big-Block at Canandaigua keeps me in shape as there’s no pacing yourself in a 35-lapper against guys like Steve (Paine), Gary (Tomkins) and Matt (Sheppard). They’re more aggressive and that makes you work even harder for a good finish,” added Burley, who registered his first career Big-Block feature win at Canandaigua earlier this summer — ironically when Paine, Tomkins and Sheppard were out of town in Advance Series action at Autodrome Drummond in the province of Quebec.

All the DIRTcar 358 stars will be signing in to join Burley at Mohawk on Thursday, including series points leader Planck and top-five runners Bicknell (4th) and Chad Brachmann (5th). Also expected in the MIR mix are tour travelers Carey Terrance and Danny O’Brien along with leading rookie candidates Tommy Flannigan and Larry Wight. The list of local favorites is headlined by top track point earners John Lazore, rookie Mitchell Jock, Jeff Marshall and Delbert LeGrow.

Action gets underway on Thursday with pit gates opening at 4 o’clock, grandstand seating beginning at 5:30 p.m., time trials going off the line at 6:30 and qualifying heats getting the first green at 7 p.m. sharp!

For additional information, please contact 358-Modified Series Director Gaston Salvas (450/655-5022 or 514/817-2270; e-mail gastonsalvas@hotmail.com) or DIRTcar NE Director of Competition Cory Reed at the Weedsport office (315/834-6606) during normal business hours. In the meantime, log into the homepage at www.dirtcar.com to find out more about the Mr. DIRTcar 358-Modified Series as well as the entire circuit.

Track information can be found at www.mohawkintraceway.com or by contacting Public Relations Director Jamie Davis (518/358-9017). MIR is located on Frogtown Road off State Route 37 in Hogansburg, New York —turn at the Mohawk Bingo Palace— only minutes from the International Bridge to Cornwall, Ontario and just a short drive from Malone and Massena in the Empire State. 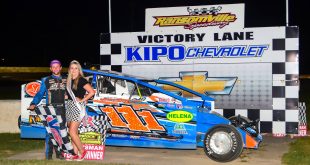 HOW THE WEST WAS WON: Senek Reins in First Career Series Win at Ransomville