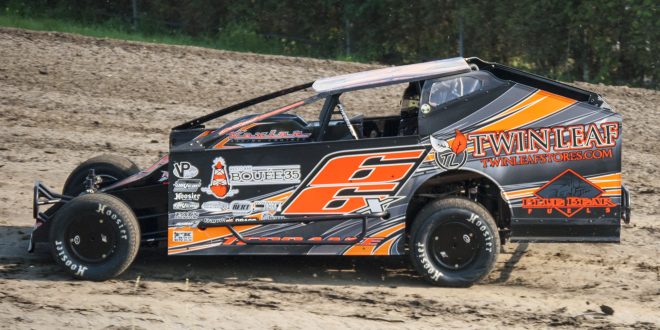 Carey Terrance led wire to wire to claim the event at Autodrome Granby.

Granby, QUE, CAN – August 10, 2018 – Autodrome Granby hosted round 2 of the DIRTcar 358 Series event and invader Carey Terrance mastered the place as he won his qualifier and led all 100 laps in the Lussier Chevrolet 100.

Terrance was all smiles in the winner circle: ‘’The car was great in the outside, cannot thank enough the crew tonight for giving me an awesome car. The winner’s car showed some sparks in the final portion of the race: ‘’I was pushing really hard on the brakes at the end and this slowed the car’’ mentioned Terrance.

Making a last-minute push was local top runner Steve Bernier: ‘’My car wasn’t the best, I thought it would handle better in the long run’’ said Bernier who intends to follow the tour: ‘’We have a good start so far, we plan to hit all the shows and see what we can do’’ completed the current points leader at Autodrome Granby in the 358 division.

Coming from 28th to finish 3rd, Lance Willix was ecstatic in victory lane: ‘’I wish we lived closer to this place, we would be here every week!’’ said Willix who had a slow start: ‘’We had a rough start to our evening, the caliber of cars is so tough out here, hats off to the top 2 ahead of me’’ finished Willix.

David Hebert and Carey Terrance sat on the front row of the field of 30-strong for the 100-lap event, Terrance jumped to the lead in front of Hebert and Kayle Robidoux in third. While Terrance had a great lead, Robidoux moved to second on lap 3 but Hebert battled back on the following lap as Steve Bernier and Steve Bernard completed the top 5 in the early going.

Terrance got close to lap traffic with a dozen laps in the books, he had nearly a full stretch lead on Robidoux and Bernier now running in third. The battle for second continued between Bernier, Robidoux and Bernard for several laps, Bernier able to pull away in second with 20 laps completed. Terrance saw is huge lead disappear at the same occasion as Gino Clair brought the caution.

On the restart, Terrance remained to the front as Bernard made a few good maneuvers to grab second in front of Bernier. Bernard set sights on the leader. Both drivers kept distance from each other when Mathieu Boisvert slowed the field down on lap 35.

On a lap 43 restart, Terrance stayed first with Bernier using the outside surface to move back to second as Autodrome Drummond promoter Yan Bussiere cracking the top 5.

At halfway point, Terrance had another sizeable lead over Bernier, Bernard, Hebert and Bussiere. The leaders avoided an accident on lap 55 as Eric Bessette and Yannick Mathieu came to a stop in turn 1.

Another strong start on lap 60 for Terrance with Hebert now in the mix for the second position with Bernier. Terrance kept his distance from the field with Bernier and Hebert doing battle for second with 30 laps to go.

Lance Willix moved into contention at that point as well, using the inside lane, he cracked the top 5 and passed Robidoux for fourth on the following lap and inched closer to Hebert with 75 laps in the record books.

The leaders got into heavy traffic with 20 laps to go, Terrance kept his distance on Bernier with Willix moving up to third.

With 5 laps to go, Bernier got closer to Terrance as they used the same lane but Terrance led the full event to capture his first 358 tour race of 2018.

The North region series will take a month off as the 358 regulars will travel to Mohawk International Raceway in Hogansburg on Friday, September 14 for the Akwesasne Mohawk Casino 75.