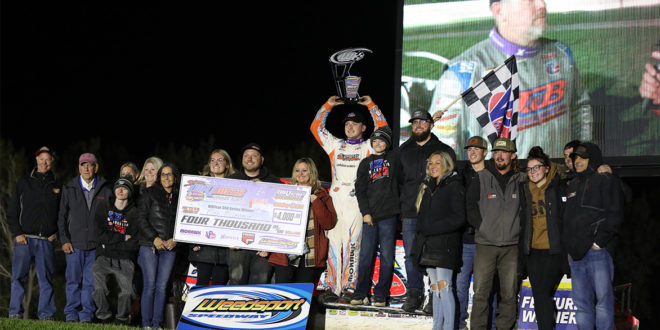 Parked at the top of victory hill at Weedsport Speedway, Max McLaughlin climbed out of his Modified, slapping the roof, elated with having achieved one of his biggest accomplishments.

You could say that was two years ago when he won his first Super DIRTcar Series victory at Weedsport during OktoberFAST. But it was also Tuesday night at the speedway during the Super DIRT Week Kick Off Party with the DIRTcar 358 Modified Series.

While his Super DIRTcar Series win is special, Tuesday night’s victory is one he’s wanted for a while – bringing his car owner, Al Heinke, to Victory Lane at the track he owns.

“This one means the world to me, right here,” McLaughlin said in Victory Lane. “That man (Al Heinke) walking up the hill right there, he owns this place, if it weren’t for him, I’d probably still be on my couch. To get the win for Al Heinke, at his track, is pretty dang cool. I’ve wanted to do that for a long time. I owe everything I got to that guy right there. This one means the world.”

McLaughlin thought his racing career was at its end in 2015. Then, Heinke gave him the opportunity to test a Big Block Modified and, shortly after, race with the Super DIRTcar Series. From there, McLaughlin’s career took off – including some NASCAR opportunities. At the beginning of 2022, McLaughlin returned to Heinke-Baldwin Racing, after a two year hiatus, with great success.

They won in their fourth race back together during DIRTcar Nationals in February. McLaughlin earned his first points paying Super DIRTcar Series win and now he’s kicked off Super DIRT Week the best way possible.

He had a bit of work to do to get there, though, in the 75-lap Feature. 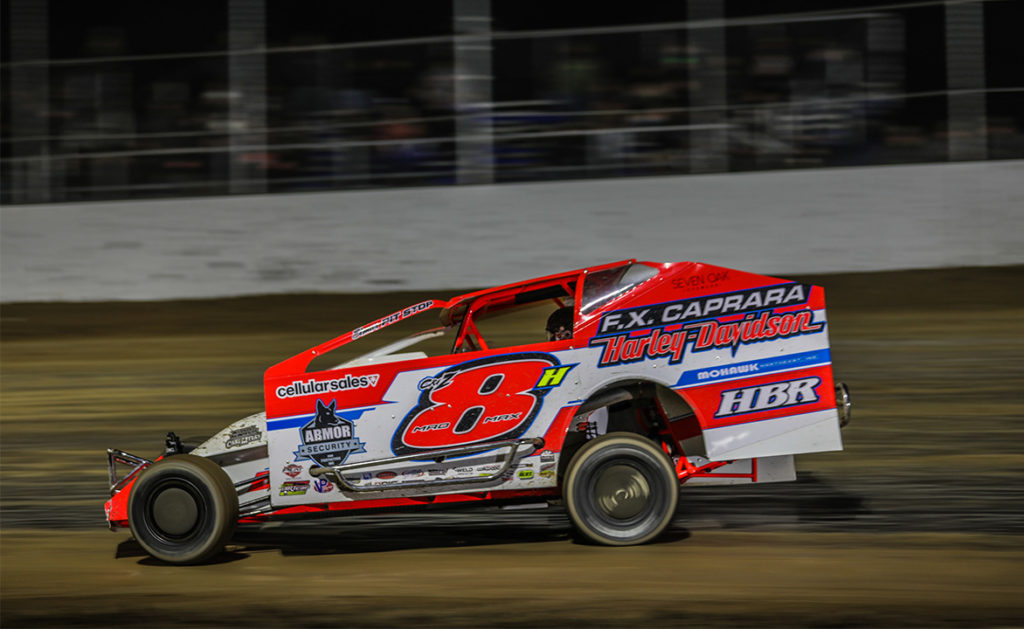 Dunn pulled ahead to the early lead, but once he found traffic on Lap 9, Marcuccilli and third-place Ronnie Davis where at his bumper.

While trapped by slower cars, Davis found an opening low to sneak under Marcuccilli and Dunn to steal the lead on Lap 10. From there, he held the lead for the next 43 laps, through several cautions, while the rest of the top 10 was constantly changing.

Behind them, McLaughlin was on the move. He found his way to fourth by Lap 27, but then got trapped there. With the bottom being the dominate lane, used by the top three, “Mad Max” had to balance patience with aggression.

On Lap 48 he found an opening under Sears exiting Turn 4 and launched ahead to take third. That put him in prime position to steal another spot when the caution came out on Lap 50. Restarting on the bottom, he was able to slide his way by Marcuccilli for second and annoy Davis for the lead, while Anthony Perrego entered the picture by also passing Marcuccilli for third.

The caution flew again on Lap 52, this time placing McLaughlin alongside Davis for the restart. He was unable to make the top lane work to get by Davis, but fate gave him another chance two laps later with the fifth caution of the night. When the race resumed, McLaughlin stayed tucked to the side of Davis entering Turn 1 and got a strong enough run off Turn 2 to clear the #32R Modified for the lead down the backstretch.

Davis fought back, sneaking underneath McLaughlin twice. However, both times the two made contact, ultimately leading to Davis’ retirement from the race.

“I just wanted to make sure I was getting enough speed on entry to clear him, I didn’t want to drive him into the inside wall,” McLaughlin said. “That first restart I drifted up on exit and spun the tires pretty bad, so I knew I needed to be in the middle on the exit of (Turn) two if I wanted a shot at him going into three. The harder I drove this thing, the harder it stuck.”

With Davis breaking and having to pull off track, that put Perrego into second and McLaughlin’s teammate Jimmy Phelps into third. However, neither had anything for the “craZ8” Modified in the final 20 laps.

The last time the DIRTcar 358 Modifieds visited Weedsport, Phelps won, and McLaughlin finished third. This time, the rolls reversed for the HBR teammates.

“Yeah, we were good, just a little too free throughout the race,” Phelps said. “I honestly didn’t expect the track to slick up as much as it did and get as fast as it did. A little bit slick and sliding but all in all I think our car is pretty good.”

With the Weedsport win he’s always wanted out of the way, McLaughlin hopes to use that as momentum throughout the rest of Super DIRT Week and climb out of his car, slapping the roof, for another special win on Sunday.

UP NEXT: The DIRTcar 358 Modified Series returns to action Wednesday, Oct. 5, at Brewerton Speedway for the Hurricane 75 during the 50th Running of NAPA Auto Parts Super DIRT Week.