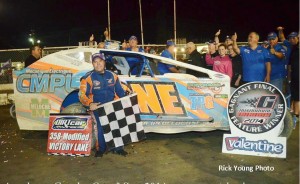 “It was a good race, a good car,” Hebert said. “I got to the front and the car stayed good to the end of the race.”

Thirty-eight cars started the 150-lap special on Granby’s half-mile, with Carey Terrance, of Hogansburg, N.Y., taking the initial lead over Erick Rudolph, of Ransomville, N.Y. Hebert started eighth on the grid and worked his way to the top five by lap 47.

Steve Bernier, who started seventh, quickly dashed to the front of the pack and overtook Terrance for the lead off a lap-25 restart. The race leaders approached slower traffic in lap 34, but Bernier skillfully maneuvered past lapped cars, putting distance between the his No. 25* and the second place car, Mario Clair’s No. 22c.

Meanwhile, Brett Hearn, out of Sussex, N.J., made it to twelfth in the running order by lap 54 after having started 32nd, and was setting his sights on the win.

Hebert was also making moves through the lapped traffic, making it to second place in lap 59 and challenging Bernier for the top spot. In lap 62, Hebert crossed the start-finish line ahead of Bernier by a nose, and before the leaders hit the backstretch Hebert had pulled ahead of the No. 25*.

However, with almost 100 laps left to the feature race, Hebert was hardly in the clear. After the completion of lap 75, the field took a mandatory five-minute pit stop to fuel up and make adjustments.

Hebert kept his lead when cars returned to the track. Behind him, Hearn was steadily working his way forward, powering past Clair and Yan Bussiere off a lap-94 restart for second. A caution in lap 96 for early race leader Bernier brought the field together again for a restart, and Hearn sped ahead at the green flag to claim the lead.

Hebert was not ready to let a win slip from him without a fight, and kept at Hearn’s tail. Kayle Robidoux, then in third, found some speed to pass Hebert in lap 105 and Hearn the next lap, but lap 106 was not complete when the yellow flag waved again.

Robidoux was able to again charge to the front, and Hebert was also fast enough on the next restart to pass Hearn as well.

With some momentum from the series of green laps, Hearn was able to make up some distance, challenging Hebert for the lead the last five laps, to no avail.

“I saw him at the bottom there, and I just pushed hard the last five laps and I stayed good,” Hebert said of his battle with Hearn.

Hearn finished second after Hebert and Robidoux third. Rounding out the top five are Clair in fourth and Dominic Dufault in fifth.