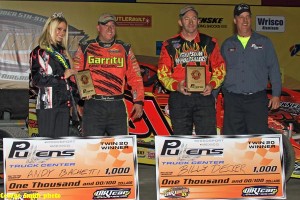 The small-block qualifiers led off the first heat-race program run under the lights in the history of the October classic at the Moody Mile. Three portable Musco light towers were positioned in the infield of the massive oval to illuminate the speedway at a level never before seen by fans and competitors.

Both Decker and Bachetti – the top-two qualifiers in Thursday’s time trials for the Nationwide Insurance 150 on Saturday (Oct. 8) – raced to $1,000 heat-race triumphs from pole-position starts. Their routes to the checkered flags were significantly different, however.

Decker, 46, was outgunned for the lead at the initial green flag of the first 20-lapper by Matt Sheppard of Waterloo, N.Y., who appeared headed to victory as the race wound down. But Sheppard rolled to a stop on lap 17 with his car’s engine silent, bringing out a caution flag that tightened the field and left Decker in the top spot for good.

“I just got out-drug down that frontstretch,” Decker said of his slow start. “We didn’t have a lot of gear (to beat Sheppard), but this Gypsum Wholesalers is good, particularly in clean air.”

A five-time winner of the Nationwide Insurance 150, Decker will shoot for an unprecedented fourth straight win in the event when the green flag flies on Saturday at 2 p.m. He currently shares the race’s consecutive win record with Pete Bicknell, who strung together three victories in a row from 1998-2000.

Bachetti, 35, dominated the second heat, roaring off the pole position to lead the entire distance behind the wheel of Steve Hough’s Teo-Pro car. He was never seriously challenged en route to a commanding victory margin of 3.854 seconds over Willy Decker of Vernon, N.Y.

“The car’s awesome and this Pat Morrison motor is just incredible,” said Bachetti, whose career-best finish in the Nationwide Insurance 150 is a third in 2000. “I can’t say enough about our package. I’m really looking forward to tomorrow’s race.”

The top-15 finishers in each heat race who hadn’t locked themselves into the Nationwide Insurance 150 through Thursday’s time trials moved on to the $20,000-to-win main event.

Both races were slowed by opening-lap accidents. In the first heat former Nationwide Insurance 150 winner Wayne Jelley of Pittsfield, Mass., slowed between turns one and two and was hit by several cars, including Chuck Hossfeld of Ransomville, N.Y. The second 20-lapper saw several cars get together in turn three with Jimmy Blewett of Howell Twp., N.J. – like Hossfeld, an asphalt Modified standout attempting to qualify a 358-Modified at the Syracuse Mile for the first time – suffering damage that forced safety crews to cradle his car back to the pit area.