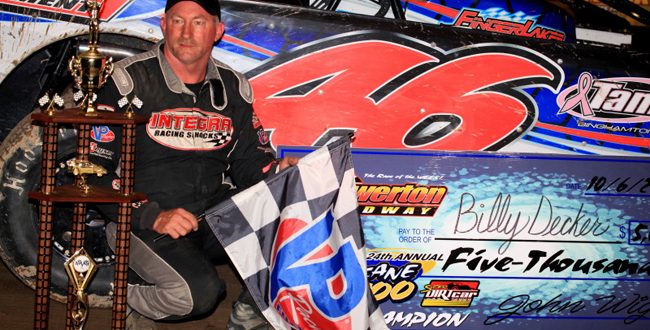 The win was the first of Decker’s career at Brewerton on the DIRTcar 358 Modified Series tour. It did not come easy, but the “Franklin Flyer” certainly made it exciting. He owed the win to his No. 46 team.

“It’s been a long time coming,” Decker said. “I’m just happy to be here. I can’t thank Jeremy Smith and his entire team enough. These guys are all pumped and I’m just tickled because they’re very exciting to be around. They’re working really hard and it’s nice to see it pay dividends.”

Decker jumped to the lead on the opening lap from the second starting spot, pushing the pole-sitter Susice back to second. The top-six quickly fell single-file over the first five laps while the rest of the field battled door-to-door for position.

The race was slowed early on lap six when an implement tire was pushed on to the racetrack in turn three. Decker got back to speed on lap 12 and jumped out front of Susice. Danny Johnson quickly made his way forward to sixth from the 12th-starting spot. The race was slowed shortly after for the second time on lap 18 when Yan Bussiere, Lance Willix and Randy Chrysler tangled in turn one.

The field came back to the green on lap 22 as Alan Johnson challenged Billy Dunn for third. Dunn held on to the spot until the next caution on lap 27 when Danny O’Brien came to rest in turn two.

The race was green for three laps before Jean-Francois Corriveau spun in turn one. The drivers found their groove on the lap 41 restart as it began a stretch of 57 green flag laps.

Susice jumped ahead of Decker when the green flag waved again. Susice held its first lead of the night for nine laps. Meanwhile, Danny Johnson and Dunn battled side-by-side for the third. Danny Johnson eventually took the position on lap 45 while Decker took the lead back from Susice on lap 49.

At the halfway mark, Decker, Susice, Danny Johnson, Dunn and Alan Johnson held the top-five positions. On lap 54, Danny Johnson took second from Susice and appeared to be reeling in Decker, who had encountered lapped traffic for the first time.

Susice jumped back to second on lap 58 after Danny Johnson was pinned behind a lapped car. The top three remained in that order until Susice caught Decker on lap 78.

Susice then raced within a car length of Decker, who was faced with navigating through a three-wide battle of lapped traffic to his front. Susice ceased the opportunity and drove to the outside of Decker on lap 80 and reclaimed the lead.

“What’s he thinking?” joked Decker in victory lane. “He was driving by me and I’m sweating, my shield’s fogging up. I’m old!”

It was a short-lived triumph for Susice though, as a slip-up in turn one allowed Decker to drive under Susice to retake the lead. Susice muscled his way past Decker again in turn one, as the two drivers made minor contact on lap 82, only to have Decker battle back to the point at the opposite end of the track.

“The lapped cars were kind of making their own lines sometimes,” said Susice, apologizing for the contact in victory lane. “[Decker] checked up to go around somebody and left the bottom open. I was committed already at the starter stand and he didn’t know I was coming so we bumped.”

Over the final 18 laps, Decker settled in up front and began to pull away from Susice. With 10 to go, Decker’s lead was nearly a second before he grew it to 2.5 seconds with five laps to go.

Decker was denied an easy trip to victory lane, however, as the final caution of the race waved on lap 98 to setup a green-white-checkered finish. Regardless, the single-file restart played to Decker’s hand as he held off Susice at the checkered flag.

“I think I sealed my left-rear tire and it held us up a little bit. He was running really good and my hats off to him,” Decker said of Susice. “I had to work a little harder than I wanted to, but it’s all in good fun.”

“I wish we could have had something for him on that green-white-checkered, but I spun my tires so badly and at that point I just went in to protection mode,” Susice said of his second-place finish.

Race Notes – Billy Decker won a thrilling battle with Ryan Susice during the 24th Annual SUNY Canton Hurricane 100 presented by Billy Whittaker Cars and Trux. Decker and Susice each led on at least two separate occasions before the Franklin, N.Y. native Decker grabbed the point position for good on lap 82. The win was the first of Decker’s career on the DIRTcar 358 Modified Series tour at Brewerton Speedway.