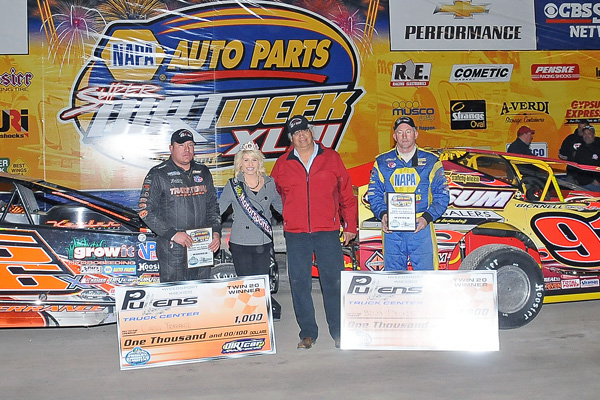 The drivers who will share the front row in Saturday’s ‘Salute to the Troops’ 358-Modified 150 authored very similar performances. Both led the 20-lappers from flag-to-flag with their only anxious moments when they were slowed by lapped cars.

Decker, 49, was victorious in the first of the two Pullens Truck Center-sponsored heats by several car lengths over Tim McCreadie of Watertown, N.Y., continuing his record of preliminary-event success at the famed Syracuse Mile. The $1,000 score was Decker’s seventh 358-Modified heat win, tying him with Brett Hearn of Sussex, N.J., for the most since the races began for the division in 1997.

“I don’t know if they’re old hat or not,” Decker said when asked about his penchant for capturing heat races. “I just know it’s good to start up front in a heat race.”

Driving a brand-new Bicknell car from John Wight’s Gypsum Racing stable, Decker raced unchallenged in front until lap eight when he stumbled while attempting to put a car one lap down. McCreadie closed right up on Decker, who recovered in time to repel McCreadie and dispose of the slower machine moments later.

“I pulled out of line a little quick off of (turn) two and got ’em lit,” said Decker, who was the 150’s fastest qualifier for the fourth time in five years on Thursday afternoon. “Timmy’s a good racer, though, I trust him, and he didn’t force the issue.

“Then I tried to get myself a little bit of distance so when I got to lapped traffic we could maneuver a little bit. It’s difficult here — everybody knows that. It seems like (the lapped cars) cut us a little bit of slack, so we made it through OK.”

Decker ended the race confident about his chances in the 150, which he has won a record six times, including four in a row from 2008-11.

“I feel really balanced if I can run the groove I want to run,” said Decker, “and if we go two seconds slower I can run the other one.”

Chris Raabe of Napanee, Ont., finished third in the first 20-lapper, close behind McCreadie at the checkered flag. Raabe started second but was overtaken by McCreadie at the initial green flag and was unable to regain the spot.

Jeff Rockefeller of Scotia, N.Y., who finished 15th, was the last driver to transfer to Saturday’s 150 through the caution-free first heat.

Terrance, who will celebrate his 34th birthday next week, turned back a brief threat from Ronnie Johnson of Duanesburg, N.Y., to bag a $1,000 heat-race triumph for the second consecutive year. He will start second in Saturday’s 150.

“It was a good run,” said Terrance, who drove his Rez Racing Teo-Pro car. “My guys are doing an awesome job on this car, the track’s fast tonight and the car is good.”

Terrance had Johnson hot on his rear bumper on lap 12 when he lost momentum behind a lapped car, but the DIRTcar 358-Modified Series championship contender cleared the slower car driven by Canadian Yan Bussiere entering turn three and was effectively home-free from there. Johnson was unable to overtake Bussiere and settled for a distant runner-up finish in Alton and Carol Palmer’s mount.

“I definitely had to work for that one around the lapped cars,” said Terrance. “I had to hang it out down there in (turn) three (to pass Bussiere).

“We just want to keep it going the rest of the week now.”

Jimmy Blewett of Howell, N.J., finished 15th and earned the final transfer spot to the 358-Modified 150.