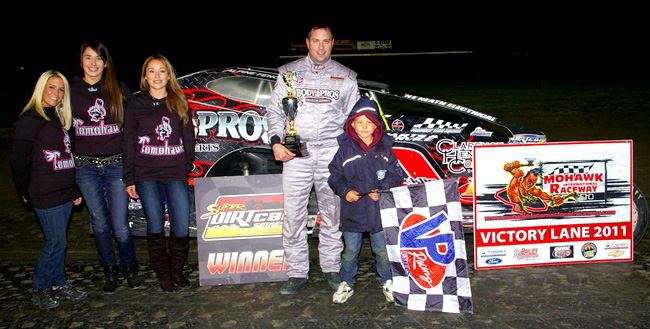 Mike Mahaney and quick-timer Clayton Benedict led the 32-car DIRTcar 358-Modified starting field to the green flag. Mahaney jumped out to an early lead and set an impressive early pace.

However, the man on the move early was multi-DIRTcar 358-Modified Series champion Pat O’Brien. O’Brien used his knowledge of the track to pass youngsters Benedict and Mahaney on the same lap and grab the race lead by lap 19.

O’Brien jumped into a comfortable lead over Mahaney until the caution flew on lap 25 when Brian McDonald’s LaSalle Racing car came to a stop. Under the caution, Billy Decker brought his car into the pit area, where crew chief Scott Jeffries made the choice to put a harder compound on the right rear of the team’s 358-Modified.

Decker restarted in 27th with just 50-laps remaining but he immediately surged forward, moving up to fifth in just 18 laps.

While Decker was charging through the field, Stephane LaFrance and Tim O’Brien were also charging towards the front. LaFrance, the 2011 Cornwall Motor Speedway track champion, moved around Carey Terrance for third on lap 37 and by lap 38 had passed Benedict for second. Tim O’Brien was able to follow LaFrance into third, and both began setting their sits on race leader Pat O’Brien.

A three-car battle for the lead had the packed grandstands on its feet. Tim O’Brien would win the battle, as he passed older brother Pat for the race lead on lap 44 with LaFrance and Pat O’Brien rounding out the top-3.

Billy Decker continued his amazing charge as he moved around Benedict for fourth on lap 45 and just one lap later passed Pat O’Brien for third. With 25 laps to go, Decker caught the race leaders as they negotiated lapped traffic.

Decker jumped to the inside of LaFrance with 25 laps to go, then pulled the same move on Tim O’Brien just two laps later to take the race lead.

From there, it was the Billy Decker show as he picked up his first DIRTcar 358-Modified Series victory of the season. LaFrance made a late pass of Tim O’Brien for second, with Carey Terrance and Jimmy Phelps rounding out the top five.

DIRTcar Sportsman Series action got off to a rocky start, as an early race tangle ended the night of Tim Sears Jr., along with front-runners Joshua Josh, Tom Conklin and Justin Wright.

The drivers then went the rest of the way incident free. Matthieu Dejarins jumped into the early lead, but it was Josh Van Brocklin who proved to be the man to beat.

Van Brocklin took the race lead from Dejardins on lap 3 and jumped out to a huge lead. Van Brocklin would go on to lap up to third place in his incredible performance.  Dan Wiesner, Mike Arquett, Kristian Smoke, and Jeff Phillips rounded out the top five.

The DIRTcar Sportsman Modified Series returns to action Friday, Sept. 23 at Brighton Speedway, while the DIRTcar 358-Series will invade Cornwall Motor Speedway on Sunday, Sept. 25, for the conclusion of its postponed event from Sept. 4. 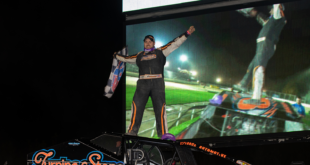