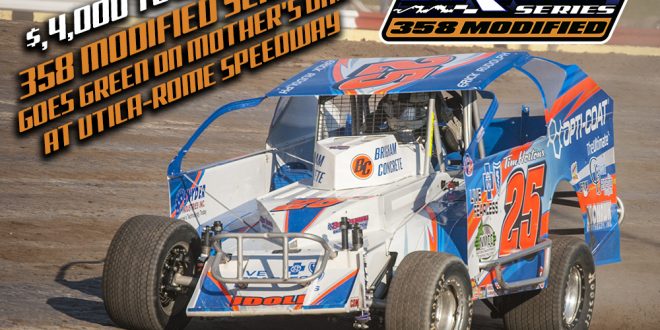 VERNON, NY – The newly unified DIRTcar 358 Modified Series rolls into Utica-Rome Speedway on Sunday, May 12, for a $4,000-to-win barnburner. The best of the best will strap on their Hoosier Racing Tires, fill up on VP Racing Fuel and blast around the monster half-mile speedway for 100 laps.

DIRTcar 358 Modified Series races started at Utica-Rome Speedway in 1999. Bill Shea, who co-owns and promotes Utica-Rome Speedway with his wife Kim, is excited to bring the Series back. Not only are they hosting the first race of the year, but the 358s will return on Tuesday, Oct. 8, as a part of NAPA Super DIRT Week XLVIII.

“We are honored to kick off the 358 Series for this year and also to bring the Series back as part of Super DIRT Week,” Shea said. “DIRTcar 358 Modified have exploded in popularity in the last few years with more tracks sanctioning them. We made the switch to the 358s last year and it’s been good for us. We can see the division growing over the last few years.  I am looking forward to the event, we think we will have a pit full of cars that will put on a great show for the fans.”

The event on May 12 will be brought to you by St. Lawrence Radiology, which has stepped up to be the race night sponsor for many of the DIRTcar 358 Modified Series events in 2019.

Out of nine completed DIRTcar 358 Series events at Utica-Rome Speedway, only three drivers with the last name other than Johnson have visited Victory Lane. Danny Johnson has won four, Jack Johnson took one in 2000, and Alan Johnson grabbed the checkered flag in 2001. Last year marked the return of the Series to Utica-Rome after a seven-year absence from the speedway, with Matt Sheppard taking the checkered flag.

They will be joined by the Utica-Rome faithful including defending Track Champion Billy Dunn, fan-favorite Marc Johnson, The Genoa Giant Pat Ward, Billy Whittaker, Jack Lehner, Mike Mahaney as well as some top names like Erick Rudolph, Mat Williamson, Danny Johnson and others looking to make up the pit log.