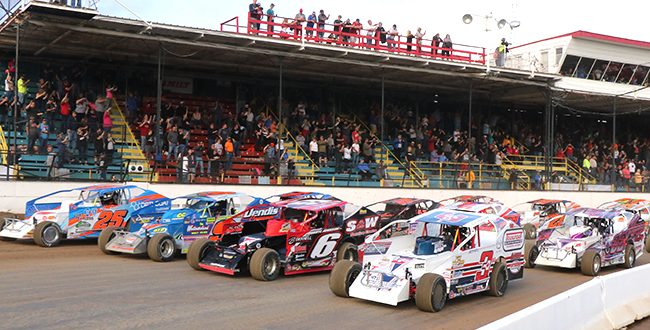 Schedule includes races Tuesday, Wednesday, Thursday nights in addition to Salute to the Troops 150 at Oswego

Five-consecutive days and nights of racing action are scheduled for DIRTcar 358 Modified teams, beginning on Tuesday, Oct. 8, and ending on Saturday, Oct. 12.

The week kicks off at Utica-Rome Speedway for “Tuesday Night Thunder,” while Wednesday night action heads to Weedsport Speedway. Action heats up on Thursday afternoon, as 358-Modified drivers will start the day in Oswego — qualifying for starting positions in the “Friday Night Lights” 25-lap heat races and the Salute to the Troops 150. Following qualifying, teams will hustle to Brewerton Speedway for the Hurricane 100.

All focus turns to Oswego’s “Clay Palace” on Friday, where drivers will be looking to lock themselves into the DIRTcar 358 Modified Series Salute to the Troops 150. A practice session will be held in the afternoon before the 25-lap heat races under the lights. Last Chance Showdowns will take place on Saturday morning and will be the final chance for teams to punch their ticket into the 150-lap event. Pre-race ceremonies for the DIRTcar 358-Modified Series Salute to the Troops 150 are scheduled to begin at 1:45 p.m., with the green flag being unfurled at 2 p.m.

Eight DIRTcar 358 Modified Series events have been completed coming into NAPA Super DIRT Week XLVIII. Over 150 drivers have attempted to qualify for those events.

Other drivers to collect DIRTcar 358 Modified Series victories this season include Mat Williamson, Billy Dunn and Fuller. Williamson scored wins at Fulton Speedway, Cornwall Motor Speedway and Mohawk International Raceway. Dunn and Fuller have one win each at Can-Am Speedway.

For tickets and more, make sure to visit SuperDIRTWeek.com, or download the NAPA Super DIRT Week app for mobile devices.