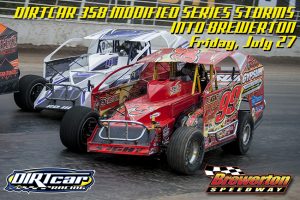 CONCORD, NC – July 17, 2018 – Brewerton Speedway hosts the long-awaited return of the DIRTcar 358 Modified Series. The stars of the 358 Modified Series are scheduled to go 100 laps on the D-Shaped Dirt Demon to decide the victor. Only one driver has won a DIRTcar 358 Modified Series race in 2018 and that driver is Super Matt Sheppard. In May, he claimed victory at Utica-Rome Speedway and at Cornwall Motor Speedway, Sheppard started from the back of the pack, charged to the front, and passed Mat Williamson on the last lap to take the $12,000 grand prize.

The high-banked, smooth Brewerton Speedway is known to host one of the most talked about 358 Modified races all year, the Hurricane 100 on the Thursday of Super DIRT Week. The grandstands and the pits are jammed for that event ever year. Now Brewerton Speedway will go 100 summer-time laps with the stars and cars of the DIRTcar 358 Modified Series. Drivers and teams will obtain value race data to add to their notebooks for the Fall.

Despite the tenacious 358 Modified Series regulars, Brewerton Speedway’s weekly field are more than capable of defending their territory. Drivers like Larry Wight, Gary Tomkins, and HBR teammates Max McLaughlin and Jimmy Phelps will surely pull out a Small-Block and go for the Series win the night before they run their Big-Block Modifieds at the Hall of Fame 100 in Weedsport, NY.

Also on the card are the SUNY Canton DIRTcar Sportsman Modifieds, as well as Mod-Lites, and 4-Cylinders. Tickets are $25 for adult general admission while youth-aged race fans get in for free. Racing stars at 7:30 PM.

DIRTcar 358 Modifieds, also known in the northeast United States as Small-Blocks, put on exceptional racing on dirt tracks across the northeast from Quebec to New York and Ontario. With several engine options available, like the affordable W-16, many DIRTcar Sportsman drivers see the 358 Modified as the next logical step for their racing career. Some of the best dirt track drivers in the world took their lumps behind the wheel of a Small-Block. Follow the excitement with @DIRTcarNE on Twitter for Series and DIRTcar Racing Track articles and updates.