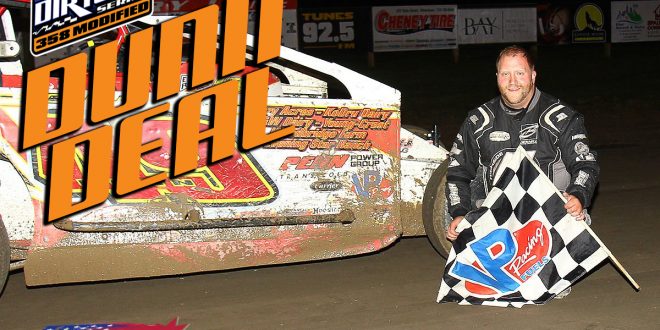 LA FARGEVILLE, NY – September 8, 2019 – A thunderstorm before the start of the racing program didn’t stop the promoter Tyler Bartlett to present the Showdown in September. The rain delay was well worth it as the shortened 60-lap event delivered a great feature with Billy Dunn outdueling Tim Fuller for the win while late arrival Erick Rudolph completed the top three after starting from back in the field.

‘’We didn’t try to overthink and got the win!’’ mentioned Dunn as he starts a busy fall race season. ‘’We are heading to Mohawk Friday and then NAPA Super DIRT Week’’ finished Dunn in the winner’s circle.

Tim Sears Jr. and Ryan Arbuthnot were on the front row of the 31-car field of the Showdown in September 60, as Sears took the lead over Arbuthnot with Chris Raabe in third. Both Sears and Arbuthnot raced side-by-side as Arbuthnot took the lead on lap three with Mike Mahaney moving to the fourth spot over Ryan Bartlett. The first caution came on lap five for Garrett Rushlow.

On the restart, Sears went back in front with Arbuthnot being challenged by Raabe for the second position as Billy Dunn cracked the top five at that occasion. Dunn passed Mahaney for fourth with fifteen laps in the books as the leaders got into slower cars. Dunn was on the move as he passed Raabe for third on lap twenty-three. The drivers of the No. 49-machine continued his way up front inching close to Arbuthnot at halfway point. Dunn used the inside portion to pass Arbuthnot for the second spot and started challenging the leader with twenty-eight laps to go.

The second caution was out for Mike Mandigo who stopped on the backstretch as Mike Mahaney headed to the pits with smoke coming out from his engine bay and lost his top five position.

The green lights were back on lap forty as Sears and Dunn were in battle with Erick Rudolph joining the front five after starting in eighteenth position. Dunn went to the lead on lap forty-five as Arbuthnot and Fuller exchanged the second position with Rudolph moving to fourth with a dozen laps to go.

Fuller started to challenge Dunn with the No. 49 closing the door several times as Rudolph had a place on the podium. Billy Dunn led the final laps and took the win over Fuller, Rudolph, Arbuthnot and Jordan McCreadie completing the top five.

The DIRTcar 358-Modified Series continues next Friday at Mohawk International Raceway for the Akwesasne Mohawk Casino 100.