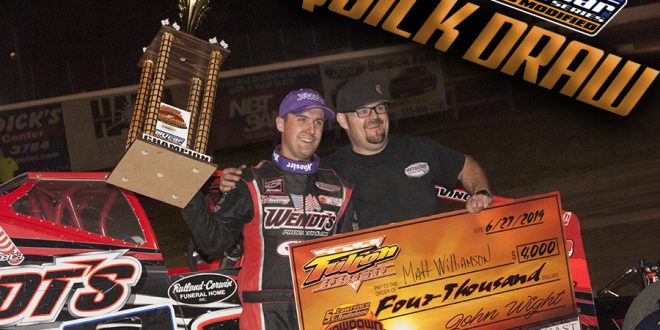 FULTON, NY – June 27, 2019 – The Showdown at Sundown came down to two cowboys from the west. Erick Rudolph dominated most of the 100 lap DIRTcar 358 Modified Series race, but Mat Williamson, in the black and red No. 6, spoiled the Ransomville native’s night with dramatic pass on a late-race restart. Williamson was ecstatic to edge out rival Rudolph, who set the Billy Whittaker Cars Fast-Time Award for the second race in a row. Rounding out the podium was The Doctor Danny Johnson who started in position number ten.

Third place at The Big Show 11. Third place at Can-Am Speedway. On the third night, Mat Williamson broke through at Fulton Speedway to take the victory.

Williamson described his race, “He [Rudolph] had a good car early. We got to lapped traffic and it was challenging for me. You gotta plan on cautions. I didn’t see anyone poking their nose for second, so I rode around on the bottom to save my tires for a late-race restart and that’s what we got. It was pretty awesome to get a win like that tonight.”

It is his first trip to Victory Lane at Fulton Speedway. “I thought we had the car to win last year at the Outlaw 200. Unfortunately, mechanical issues took us out of that. I can’t say enough about this thing tonight. It was pretty stout on the restarts and luckily we were here at the end.”

Next up for Williamson is Ransomville Speedway Friday night and then the Super DIRTcar Series heads to Cornwall Motor Speedway and Plattsburgh Airborne Speedway on Sunday and Monday. “We gotta keep this momentum going into the long road trip. I can’t thank the guys that came with me this week enough and a win like tonight makes everything worthwhile.”

Erick Rudolph was understandably disappointed to lose the lead so late in a race that he had dominated. Rudolph was pleased with his car and the race he put together but ultimately believed he should have won. Not one to dwell, the No. 25R driver moved on to discussing his Hoosier Racing Tire Weekly Championship race at Ransomville Speedway Friday night.

“Going into Ransomville tomorrow, we’ve had a good race car there. We are running really consistent. I’m really proud of the car, the team, and all my sponsors and supporters. Hopefully, we can keep that consistency going.”

Danny Johnson found himself back on the podium with the  No. 83. “We had a good race car, there’s no doubting it. We had troubles last night where it jumped out of gear. We thought we had it fixed but it still jumped out of gear about five times. I held it in gear with one hand and kept my other hand on the wheel,” said Johnson.

The new team is starting to find a rhythm. “I am real fortunate to have these guys behind me [car owner Chris Stevens] and bring the car to the track and get it going. We made some changes and got it going really good.”

A total of 46 small block modifieds filled the pits at Fulton along with fifty-two DIRTcar Sportsman Modifieds that saw the complete show checkered in just three hours.

Tim Fuller, who won the night before, pulled off early in the race with mechanical woes and did not return to the speedway.

Chris Hile finished thirteenth and that is the lucky number chosen to receive a free Hoosier Racing Tire.

The next DIRTcar 358 Modified Series race is Sunday, July 14 at Cornwall Motor Speedway followed by a trip to the Mohawk International Raceway just across the border