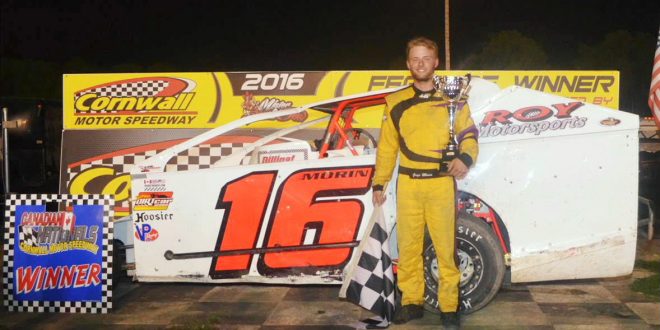 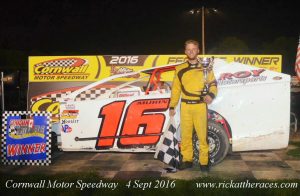 CORNWALL, Ont – Sunday, September 4, 2016 – Local star Gage Morin captured the biggest event of the year at his home track. The driver of the #16 machine took the lead on lap 13 and repeated the feature from 2015 by winning the DIRTcar 358-Modified series event at Cornwall.

“I have a great car, but this race was nerve racking. 125 laps is a long race, and I am tired,” proclaimed Morin after resisting numerous charges from runner up Chris Raabe. “I can’t thank my crew enough, and also my grandfather, who is pretty proud at the moment,” continued Morin in reference to longtime track promoter Ron Morin.

Throwing everything to Morin, the second place finisher Chris Raabe was also all smiles in the post-race interview: “It is always fun to have a great car to drive and finally win this track championship as we came close in the past, but the driver was not able to close the deal,” stated Raabe, the new Cornwall track champion in 2016.

Jordan McCreadie and David Hebert were on the top row of the Bandit Motorsports Canadian Nationals 125-lap finale. Hebert took a commanding lead over McCreadie with Tommy Flannigan running in third. Hebert slowed in turn 4, and caution came out on lap 14. On the restart, Morin took the lead as Raabe made his way to second with McCreadie sliding to third. A side-by-side battle continued between Morin and Raabe for several laps.

The caution came out due to debris on the speedway on lap 42. McCreadie pulled his 9j machine into the infield. When the race was back in action the leaders quickly got into heavy traffic on lap 55, and Raabe pulled closer to Morin as Mike Bowman put his 71 machine into the infield and caution was out on lap 61. Action started back on lap 65 as Yan Bussiere and Roy Delormier came together in turn 1, which brought up the lap 75 pit stop.

The race resumed after the mandatory stop, and both Morin and Raabe resumed the battle for the lead. As both drivers got into slower traffic, Mario Clair was able to get close in on them as an accident occurred on lap 92 in turn 2. When the green lights were back Morin stayed first. Raabe tried everything to pass him, but the leader resisted as Carey Terrance made his way to the top 4 with less than 20 lap remaining.

A accident with 7 laps to go sent Michael Parent upside down and Flannigan reeling. On the restart, Terrance moved up to third, passing Clair. Tyler MacPherson and David Hebert got together below the flag stand bringing the race to a green-white-checker situation. Morin led the final race capturing this event for a second year in a row over Raabe, and Terrance finished third.

The series will remain close to Cornwall as it crosses the Cornwall Island bridge and heads to Mohawk International Raceway in less than two weeks on Friday, September 16, and then the following night at Autodrome Granby.