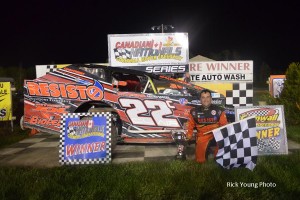 “The car was perfect,” Cornwall’s 2013 Modified track champion said after the 100-lap feature race. “It was a good battle. The car was very fast on the outside groove.”

Clair, who hails from Drummondville, Quebec, fended off tenacious challengers, including former DIRTcar 358-Modified Series Champions Dale Planck (2012) and Erick Rudolph (2013) to claim Sunday’s series opener win. From the third spot on the starting grid, Clair had a good position from the green flag, and his expertise at Cornwall helped him conquer a stout field of competitors.

Alain Boisvert, of Lachine, Quebec, drew the pole for Sunday’s feature and led the field through 35 laps and three early cautions. Boisvert charged ahead at the third restart of the race in lap 33, but small-block star Planck, of Homer, N.Y., was gaining ground and overtook Boisvert in lap 35.

“We had a really good car. The Page Trucking Bicknell was awesome right from the get-go. (Car Owner) Mike Payne made all the right calls for the feature,” Planck said of the No. 7z. “I bided my time on the bottom and actually took the lead on the outside. The car was rolling really good.”

A three-car collision in lap 40 halted the pace of the race for another set of yellow laps. Planck yielded to Boisvert’s challenges and fell to second as the early race leader powered ahead to reclaim the lead on the backstretch. Behind them, Clair was gaining momentum and preparing to make his move.

After a lap-45 caution took the No. 01 of Chris Raabe off the track, Clair found his opportunity in the lap-48 double-file restart. He motored high on the track’s topside to pass Planck for the second spot. While Clair was finding speed on the outside groove, Planck was able stand his ground from the challenging inside groove.

Planck challenged Clair again in lap 68, restarting strong on the inside to pass the race leader, but Clair gained back the position in lap 76. He held onto it the remaining laps, outlasting three more yellow flags, one red flag, and late-race challenges from defending DIRTcar 358-Modified Series Champion Rudolph.

“It was a good race and we came out in one piece,” O’Brien said. “That was a tough race track. There was a lot of water down in the bottom of (turns) 1 and 2. The first few restarts were crazy, but once it started going it wasn’t bad.”

Rounding out the top ten in Sunday’s finish were Boisvert in sixth, Steve Bernier in seventh, Joel Doiron in eighth, Dominic Dufault in ninth and Lance Willix II in tenth.

The DIRTcar 358-Modified Series continues Monday, May 19, with a second 100-lap event in Ontario. The series heads to Thorold, Ontario, for a full night of racing at Merrittville Speedway.