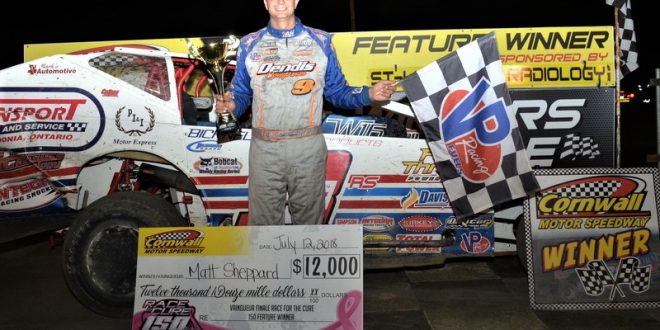 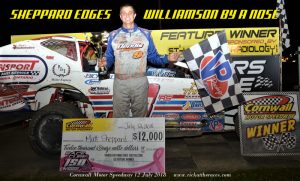 Sheppard recovers from a 26th spot and makes a pass on the final lap to capture the initial round of the 358-Modified North Series race at Cornwall.

Cornwall, Ont , CAN – July 12, 2018 – The north portion of the 2018 DIRTcar 358-Modified Series started in great fashion at Cornwall Motor Speedway with the richest race of the tour one of the longuest race as well in the Series. Matt Sheppard left Cornwall with 12000 reasons to smile and no better way to celebrate his 36th birthday as he captured $12,000 to win Race for the Cure 150!

After a lap 4 accident, Sheppard charged back from a 26th starting spot to first: ’Wow, I don’t what to say! I thought my night was over after that crash but was able to come back’’ mentioned a smiling Sheppard. ‘’The car got better as the laps got by as you could see the car bobbled during yellows’’. ‘’I can’t thank the Slack family for giving me this ride tonight, if it was not from them, I would not be here tonight!’’ completed Sheppard who collected a total of $18,000 in about 10 days at Cornwall after winning the Super DIRTcar Series on July 1st.

Collecting second in the feature was Mat Williamson: ‘’I thought I had it tonight, it was a matter of a few feet’s!’’ mentioned Williamson. ‘’We worked hard during the break to get this car ready and it paid off!’’

Winner of last season’s event, Tim Fuller finished on the final step of the podium. ‘’We had a great car but hat’s off to both Matt’s for their run here tonight, the track was in great shape!’’ said Fuller.

Gary Lindberg and Jordan McCreadie led the field of 32 strong to green in the 150-lap Race for the Cure Feature as McCreadie took the early lead over Lindberg and Carey Terrance. A tangle involving Matt Sheppard and Dale Planck in turn 1 occurred on lap 4 and yellow was out, drivers were able to return to action.

Action resumed on lap 11 with McCreadie leading the way as Terrance looped in turn 2 and caution was out lap 13. McCreadie remained in front as a few new faces joined the top 5 with David Hebert, Steve Bernard and Tim Fuller by lap 20. Bernard started to make progress in front as he took second spot by lap 35. Leaders were reaching lap traffic when an accident occurred between Steve Morris and Stephane Lafrance.

On the restart on lap 45, McCreadie remained first with Bernard following closely as battle went on for third between. Something let off on McCreadie’s ride on lap 55 and had to let go the lead to Bernard. The #54 to the lead with Lindberg in second with Brian McDonald and Mat Williamson making their way front after starting in the mid field.

At halfway point, Bernard was leading over Lindberg, McDonald, Fuller and Williamson. A lot of changes on a lap 79 restart as Lindberg pulled a great move on Bernard for the lead as Williamson move to third. Williamson had a great car and took second on lap 84 over Bernard.

With 50 laps to go Lindberg kept his distance from but after starting back in 26th, Sheppard made his way in the top 5 and was on a mission passing the leader and moving up to second by lap 120. Kevin Hamel brought the field together on lap 124. Williamson leading the way, but Sheppard was following closely as Lindberg stopped in turn 4, losing his great 3rd place run with 22 laps to go.

The leaders got into lap traffic with 10 laps to go as Sheppard was riding on the bumper of Williamson. Sheppard waited patiently behind the leader and chose the high lane in traffic with 2 laps to go, Sheppard used that lane and pulled besides Williamson with the white flag waving, both drivers races side by side as Sheppard got the edge at the winner’s circle over Williamson by only .042 seconds as Fuller completes the podium.

The DIRTcar 358-Modified Series will head to Brockville Ontario Speedway on Wednesday, August 8 for the Bullringer 110, another great purse as the race winner will take $10,000 home. The Brockville race will start a busy week for the series as they will visit Mohawk on the Thursday and Granby on Friday