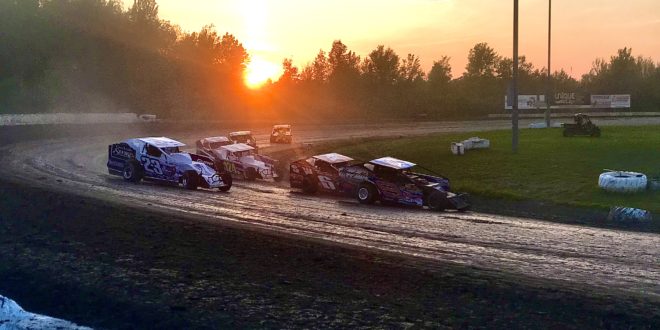 HOGANSBURG, NY – On the land of the Mohawk Nation at Akwesasne sits one of the finest DIRTcar facilities in the Northeast, Mohawk Int’l Raceway. The smooth, wide track with excellent lighting and grandstands provide a premier race experience for both competitors and race fans.

DIRTcar sanctions Hoosier Racing Tire Weekly Championship DIRTcar 358 Modifieds and Sportsman Modifieds at Mohawk which attracts top-flight talent from both New York and Canada. In addition to the track’s point fund, each DIRTcar driver will have an opportunity to take home another check at the banquet in November.

Some of the best DIRTcar 358 Modified drivers in the North Country battle it out on this border town track. Last year, Chris Raabe, the 29-year-old driver from Alexandria, ON, won the track championship over star drivers such as second-place points-getter Michael Maresca. Maresca is a threat to win anywhere he races including when he races with the Super DIRTcar Series.

Down the line, DIRTcar 358 Modified Series contender Lance Willix, another second-generation driver Louie Jackson Jr., plus the legendary Watertown, NY native Tim Fuller are all regulars in the Mohawk pits.

Tim Fuller is one of the all-time best around the Frogtown oval. In 2018 Fuller set the single-season win record with 10 trips to Victory Lane. Rain forced the schedule down to only 15 races and Fuller never finished lower than third to secure his second consecutive track championship.

On Monday, July 13 the DIRTcar 358 Modified Series hits the four-tenths of a mile semi-banked high-speed oval for a crucial points-paying tour stop. Last year, Super DIRTcar Series champion Mat Williamson powered his way to the win in the series race, getting the jump on the best North Country drivers in the business.

The 358 Series returns on September, 18 for the final round of action before NAPA Super DIRT Week kicks off at Utica-Rome Speedway. The points gathered at Mohawk are vital for going into the Super DIRT Week stretch of four races in five days in October.

On September 19, the DIRTcar Sportsman North Region and Pro Stock Series makes a stop making for an action-packed fall weekend to bring down the curtain on the 2020 season.

The North Region for the DIRTCar Sportsman Series also will have a special Thursday event on June 25. It’ll be tough rowing for Series regulars against the best of Mohawk’s Hoosier Racing Tire Weekly Championship roster.

Mohawk Int’l was born in 1987 as Frogtown International Speedway as a vision from Dennis White to build a race track on his hometown reservation.

The speedway is right on the border of the US and Canada on New York State’s northern border. Cornwall, Ontario is direct across from the St. Lawrence River. Cornwall Motor Speedway races DIRTcar 358 Modifieds and Sportsman every Sunday.

On your trip, stop at the Frederic Remington Art Museum and peer into the American West with incredible paintings, sketches, and sculptures. It’s a great place to stop with the family.

For wine lovers, the River Myst Winery is a great escape to treat your partner during your racing weekend.