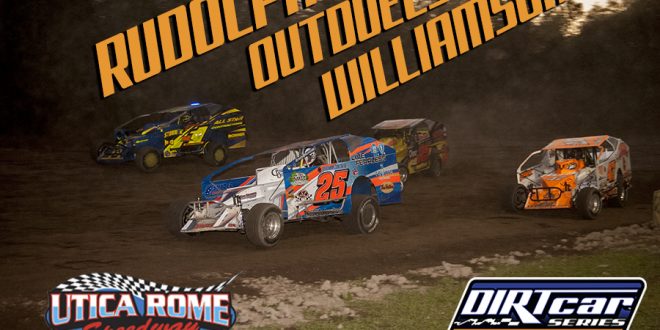 VERNON, NY – July 21, 2019 – Third-generation Ransomville, NY driver Erick Rudolph outdueled the red-hot Mat Williamson to take home his first DIRTcar 358 Modified Series race of 2019. Rudolph came into the event with four top-five finishes in the first four Series events but finally broke through for the win at the half-mile Vernon, NY dirt oval. The Genoa Giant Pat Ward rounded out the top three. Ward drove up from the eleventh starting position to make the podium.

It was around lap 80 that Erick Rudolph pounced on points leader Mat Williamson to take the lead. Williamson had led most of the race from the early going after passing pole-sitter Todd Root.

“Utica-Rome Speedway has been really good to us this year. I was a bit concerned early. I thought the top three were a bit faster than us. As the race went on the track came to us a little bit and we were able to put it in Victory Lane,” Erick Rudolph told DIRTcar 358 Modified Series announcer Tim Baltz.

There was no time to sit back for the pilot of the No. 25R. It was go-time from the drop of the green flag.

Rudolph said, “I was trying as hard as I could every single lap. It’s 100 laps but before you know it, it’s over.”

Mat Williamson, from St. Catherines, Ontario, still holds onto the Series points lead. He entered the Utica-Rome Speedway event on a tear with three Series wins in a row. The No. 6 was excellent on the short runs but late in the race, Williamson was overtaken by Rudolph.

“Erick [Rudolph] had a good car. He was better at the end than we were and that’s what it takes to win these races,” and right now, no one knows how to win 358 Modified races as Williamson and Rudolph do.

Rudolph and Williamson have a developing rivalry. They race against each other weekly at Ransomville Speedway, they race head-to-head in 358 Series competition, and finally, both drivers meet in every round of Super DIRTcar Series racing.

The battle changed completely when a lapped car hit an implement tire in turn three and spun to a stop in the middle of the track just as the leaders were coming around. Rudolph missed the stricken car but Williamson bounced his right rear tire hard off of him.

“I think I got some damage from when I hit that lapped car that spun out in front of me. I could make up a bunch of excuses but we didn’t win. It is what it is and we’ll get it in the trailer and go to Quebec tomorrow [Super DIRTcar Series doubleheader at Autodrome Drummond and Granby].”

The Gypsum Racing driver in the crimson red No. 42 from Genoa, NY Pat Ward showed the young guns how it’s done and claimed the final spot on the podium. Pat Ward had to fend off the likes of Billy Dunn and DIRTcar 358 Modified ace Corey Wheeler to hold on.

“We started eleventh and came up through the field fairly good. We weren’t super-duper good but the car was working,” Ward noted.

After passing all of those cars, Ward had capable drivers try to work him over.

For the second time in a row, Mike Mahaney in the black and yellow Huttig No. 35 took home an extra $100 for the Billy Whittaker Cars Fast-Time Award. Mahaney raced in the top five for most of the race, but a flat tire necessitated a stop in the pits. After starting tail Mahaney worked his way up to finish in the sixth position.

The Series takes a bit of a Summer break until Tuesday, August 20 when the Series gets back to action at Plattsburgh Airborne Speedway.