The final round Gaetan`s Chip Stand Canadian Nationals/DIRTcar 358 Modified Series, saw Chris Raabe took the initial lead in the 125-lap event as Stephane Lafrance quickly jumped to second. Caution came out on lap 3 as Mike Bowman had a fire in the back of his car.

On the following green, Lafrance grabbed the lead as the yellow lights came back on lap 9 with a 3-car tangle causing the caution. Lafrance lead the way over Raabe and Kayle Robidoux running in third. The yellow flag was back on the speedway on lap 18 as Joel Doiron slowed on the backstretch.

Lafrance stayed at the top with 25 laps down as Steve Bernard, now in third, passed Robidoux. Ledoux slowed the field down on the next lap. Bernard was on the move as he got Raabe and was chasing the leader Lafrance with 36 laps in the books.

Bernard build himself a sizeable lead as the race got momentum, Lafrance and Robidoux trying to get closer to the leader as they got into heavy traffic. A lap 55 caution occurred for Brandon Sweet and Justin Lalancette who got together on the front stretch.

Bernard rocketed to the lead on lap 60 with Matt Williamson making his way to fourth. Williamson continued his way up grabbing third on lap 70 while Bernard was comfortable in front. The mandatory caution occurred on lap 75 as the car stopped on the front stretch for a 10-minute pit stop.

The green was back after the break with Bernard in the lead, as the top 3 remained the same. The leaders got into heavy traffic on lap 85 as Lafrance was now close to Bernard but the leader was able to build a little distance with 30 laps to go. Dingwall got out of the speedway on lap 96 and the yellow was out.

On the following green, David Hebert found something running up to fourth as caution was out on lap 100. Looking for track championship and also the Canadian Nationals title, Mario Clair stopped on the front stretch and was sent to the pits. Only 1 lap was completed as championship contender Chris Raabe stopped in turn 4 opening the chances to others for the titles.

While Bernard was alone in front, Lafrance, Williamson and Hebert had a good battle for the other top 4 positions. Hebert got Williamson with 4 laps to go for third spot. Bernard led the final laps to capture the win over Lafrance and Hébert.

Bernard was smiling in the winner`s circle: “my friend were teasing me because I was mad last night not winning at Drummondville, but winning here tonight is very special!” Longtime supporter of big events at Cornwall, Bernard also noted this for his win: ”We have been coming here for so long and finally being able to win a big one is something I will remember for a long time!”

The Series will remain in Canada as round five will be held at Autodrome Drummond next Friday evening as the Modifieds will have a 75-lap event part of a busy month of September for this division. 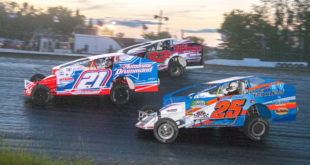