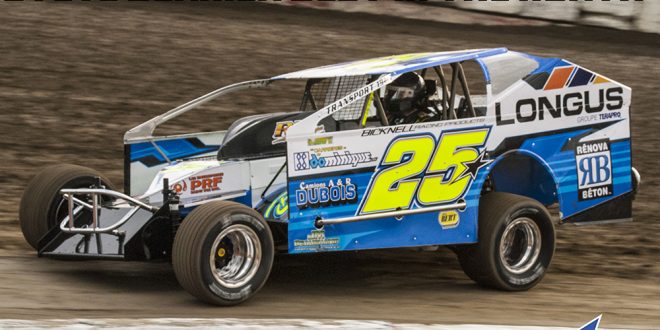 Steve Bernier Best in the North

Drummondville, QUE, CAN – Sept 22, 2018 – It was a hard-fought battle to the end at Autodrome Drummond as Steve Bernier continued his success in the month of September with his first win on the tour. The win secured him the DIRTcar 358 Modified Northern Region win and accompanying bonus points going into the combined tour races in October.

Claiming a first win on the 358 DIRTcar teries in 2018, Steve Bernier was really happy to take the win: “The track was rough, and we lost a spring on the engine, we are glad to be here!’’ said Bernier who claimed the Northern Region points lead before the combined tour begins. ‘’This is only 1 portion of it and we are going to 4 tracks we don’t really know, so we will see what happens then’’ added Bernier speaking about the upcoming combined series races during NAPA Auto Parts Super DIRT Week XLVII.

Finishing in second, Steve Bernard was disappointed: ‘’We had a great car, the track was difficult, but we started twelfth and we finished second” said Bernier who has a big month of October. ‘’We are confident, we got beat by Steve tonight, we will try to beat him at Oswego’’ finished Bernard looking forward to the upcoming weeks.

Completing the podium, Carey Terrance had a great run in Quebec after winning the 2nd round at Granby back in August: ‘’We had a good car in the short runs, as soon as the race picked up a bit, I got slower’’ said Terrance.

Simon Perreault and Michael Parent were at the front row of the 30-car grid as Parent got the lead with Lance Willix moving up to second and Steve Bernier in third. Parent got into slower cars by lap 8. Bernier used the outside lane to pass Willix in turn 2 to grab the lead.

Kayle Robidoux brought the first caution on lap 12 as a good battle was occurring between Carey Terrance, Mario Clair and Steve Bernard for fourth.

Parent led the way over Bernier and Terrance moved up to third as Louie Jackson slowed the field down on lap 21. Parent continued to lead as Clair claimed third from Terrance on the following green.

A good battle for fourth spot between Terrance and Bernard at lap 35 as Bernard used the top lane to pass Terrance. Yellow lights were out on lap 39 for David Hebert who had a flat tire.

On the green, Bernard jumped to third with 2018 Drummond champion Mathieu Desjardins joining the top 5 with forty-five laps in the books.

At halfway point, Parent, Bernier, Bernard, Clair and Desjardins were the top 5 as Mathieu Boisvert slowed in turn 3 on lap fifty-two and brought the field together.

Each restart added to the suspense of the race as Clair was back to third with Terrance also in the top 5.

The hopes of Parent to get a first win on the tour vanished on lap 67 as his car broke in the front stretch and he gave the lead on a silver platter to Bernier.

A big wreck happened in the front stretch as several cars were involved with Gino Clair making a rollover halting the race on lap 79. Mathieu Desjardins who was running fifth was also in the accident.

On the green, Bernier went to the lead with Clair challenging him for a lap before fading to fourth with Bernard and Bernier’s brother Francois now in third.

Bernard challenged Steve Bernier for the lead with 10 laps to go as Mario Clair was quick on top on the speedway and was back in third. Both leaders ran side by side as Bernier got the edge on Bernard.

Mario Clair saw his great run ended on lap 98 as his left tire tore apart. A green white checker finish as Steve Bernier led the final two laps with Terrance surprising Francois Bernier at the end to get third.

With his win, Steve Bernier claims the Northern portion of the DIRTcar 358 tour.

This concluded the Northern Region tour as the combined series will head to Central NY for a very busy Super DIRT Week starting at Utica-Rome Speedway on Tuesday, October 2nd, followed by Weedsport, Brewerton and all activities at Oswego.

40 cars in attendance for the last round of the north section, the second-best number after opening round back in July with 43 cars in the pits