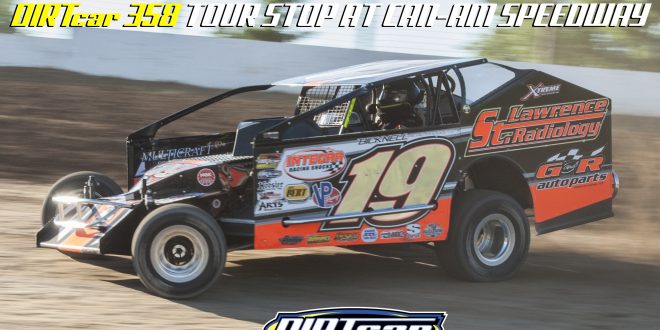 Tim Fuller grabs early lead and never looks back in the 75-lap event.

Lafargeville, NY – Sept 8, 2018 – Can-Am Speedway closed out their season with the DIRTcar 358-Modified South tour race with Tim Fuller showing everyone the way during feature time, taking the lead on lap 5 and never looking back.

‘’The car was fast, the sprint cars rubbered up the track’’ said Fuller. ‘’I am thankful my owner Mike Maresca is here tonight from St-Lawrence Radiology, I hope he enjoyed the show’’ added Fuller. ‘’The track was good happy to win here tonight!’’ finished Fuller.

Finishing in second was 2018 track champion Billy Dunn: ‘’The track was slippery, Tim had a real good car and needed to be spot on to pass him’’ said Dunn who also had good words for third place finisher in Ryan Arbuthnot: ‘’He also had a good car and was fun running against him tonight’’

Being one of the only drivers to try the top side was Ryan Arbuthnot: ‘’Had a good run, started the night on a bad foot, the high side was good to me and had to try something tonight as I didn’t want to finish 8th or 10th’’

Billy Whittaker and Jeremy Wilder led the field of 30 to green of the Showdown in September 100, Whittaker to the lead when Ryan Bartlett slowed the field down. A lap 5 restart gave Ronnie Davies III the lead as Tim Fuller jumped to second. Preston Forbes stopped in the backstretch and yellow light were out on lap 7, Forbes needed help to head to the pit area.

Another lead change on a restart as Fuller powered by Davies on a lap 14 start, Fuller immediately built a good lead over the field with Billy Dunn now on the lead pack in third. Dunn charged for second as he got closer to Davies III.

Fuller was heading into heavy traffic as Lance Willix slowed the field down on lap 24. The race resumed 5 laps later with Fuller in the lead as Dunn moved up to second with Jordan McCreadie in fourth. McCreadie’s work was not done as he slipped by Davies III for the third spot on lap 31.

At halfway point, both Fuller and Dunn had separated themselves from the field as McCreadie, Davies and Pat Ward completed the top 5 at that point. Bob Henry brought the field together on lap 42.

Fuller was strong on restarts and got his lead back on Dunn and McCreadie on a lap 50 restart. The 2018 Mohawk Speedway champion saw his lead disappear on lap 57 as Rylee Gill stopped in turn 4.

On the restart, Fuller remained first as Ryan Arbuthnot made the outside work from him jumping from 5th to 3rd and moved by Dunn on the following lap. Ryan Bartlett spun in turn one and caution was out with 15 laps to be completed.

No change in positions when the green lights came back, a good battle for second spot occurred between Arbuthnot and Dunn for second as both drivers ran side by side for several laps with Tim Sears jr and McCreadie rounding out the front five with 10 to go. Dunn got the edge on Arbuthnot for second on lap 67.

The final race of the Southern portion of the DIRTcar 358 tour will be run at Fonda on September 21 for the Thunder along the Mohawk 100. The North portion is back in action next Friday evening at Mohawk for the Akwesasne Casino 75 before heading to Quebec for a double header at RPM and Drummond on September 21 and 22.

Heat winners were Tim Fuller, Tim Sears Jr., Jordan McCreadie and Billy Dunn, all 4 drivers had the fastest time in their respective groups.