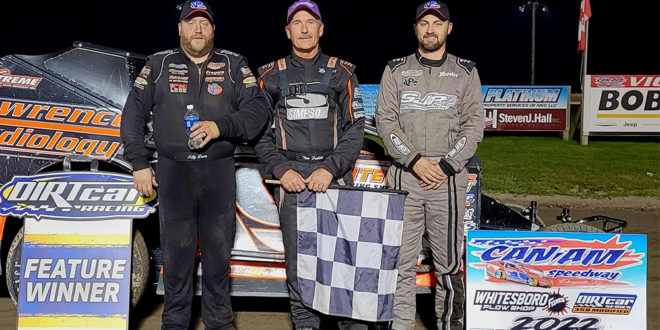 A week after claiming the Can-Am Speedway track championship, Tim Fuller added to his success at the track Friday night during the DIRTcar 358 Modified Showdown in September.

The Watertown, NY-native claimed his sixth Can-Am Speedway victory of the year, the 38th of his career at the track, and his first DIRTcar 358 Modified Series win of 2022.

After finding rare luck with drawing the pole for the 60-lap race, Fuller said he didn’t want to waste that opportunity. He intended on pulling ahead on the initial start and setting an early pace.

Shaun Shaw spoiled his plans on opening lap. He drove around Fuller in the first corner, leading the veteran to say to himself, “Not on my watch.”

A caution on the first lap put the two side by side again for the restart. They stayed that way for multiple laps when the race resumed until Fuller reclaimed the lead on Lap 7. Then, Fuller refused to relinquish it again.

Five more cautions throughout race hindered his plans of having a clean drive and brought new contenders to his doorstep each time. Reigning DIRTcar 358 Modified champion, and fellow Watertown, NY driver, Billy Dunn, moved into second after the Lap 13 caution, bringing David Marcuccilli and Rocky Warner into the battle with him.

After the halfway point, Dunn lost second to Warner who then took his turn at trying to run down Fuller. He failed. And from that failure, Dunn found his way back around Warner on Lap 39.

With 10 laps to go, Dunn found grip around the high side of the speedway, closing the gap between he and Fuller. On Lap 51, he gave Fuller his first scare of the race, powering alongside Fuller’s #19 Modified.

The two raced side by side for multiple laps until lap traffic came into play. Fuller wasted little time getting around the slower cars, helping him to put distance between he and Dunn. That allowed the 2022 track champion to finally cruise with ease to the Series victory.

“When you’re the leader, you never know what the right groove is,” Fuller said. “They started showing me tires and stuff, thinking that was the better groove but it didn’t make me loss sight.”

While Dunn had to settle for second at his home track, he leaves Can-Am with the Series points lead.

“We struggled there the first 30 laps to find a good balance,” Dunn said. “We were a little tight the whole time, but I found something there when I got to second and thought we might get a run at [Fuller]. Got the right rear a little too hot. Best car won.”

Ronnie Davis III drove his way through the field from 16th to third by the end of the Feature. Warner finished fourth and Taylor Caprara rounded out the top five.