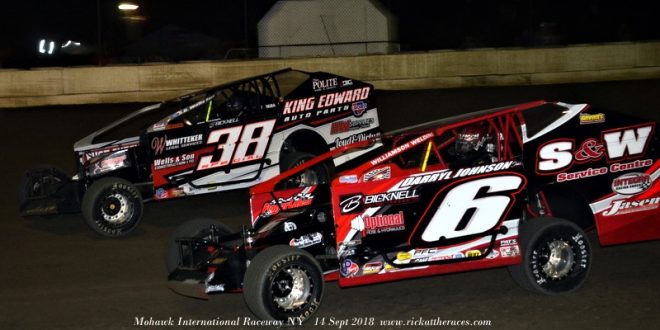 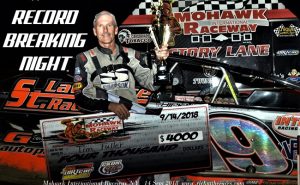 Hogansburg, NY  – September 14, 2018 – Even with a rough start to his night, Tim Fuller showed everyone why he is the 2018 track champion as he broke the Mohawk track record with his 9th win of the season and second in a row on the DIRTcar 358-Modified Series after Can-Am last Saturday.

‘’It was a fun race for sure!’’ said Fuller, who had a little scare with about 10 laps to go, ‘’I got the cushion and my glove hit the seatbelt and I knew I could not slow down and buckle it back coming into turn 1’’ added Fuller. ‘’Mat drove another solid race tonight as we battle for a bit’’ finished Fuller after speaking of Williamson that was in the runner up spot.

Williamson was still smiling in second spot: ‘’I thought I would’ve win this one but when I saw Fuller coming, I said to myself not again’’ said Williamson. ‘’Will be back tomorrow night and ready to do battle with the big block’’ mentioned Williamson speaking of the Super DIRTcar Series in town tomorrow night.

Steve Bernier made a late race charge to finish on the podium: ‘’The car took a little bit of time to get fast, but it was really quick on the long runs, I would have like to see a 100-lap event’’ said Bernier who plans to run the remainder of the DIRTcar Series. ‘’We will be in Quebec next weekend for the 2 races and then we will prepare for Oswego’’

Lance Willix and Lee Ladouceur led the field of 30 strong to the initial green of the Akwesasne Mohawk Casino 75 as Willix used the inside lane to take the lead over Ladouceur and Jeff Sykes in third.

Kyle Dingwall and Mat Williamson were on the move taking positions 3 and 4 as the front two had pulled away from the field with 10 laps in the books. Ladouceur made a charge for the lead while Williamson used the outside lane to take third on Dingwall as we clicked lap 17. Williamson continued his way forward as he took second on lap 20.

Williamson finished his work on lap 22 as he took the lead using the high lane passing Willix under the flag stand as the leaders were in heavy traffic.

A lot of action in the back half of the top 10 as they were racing with slower competitors, Carey Terrance and Steve Bernier were also making some noise as they were 3rd and 4th by lap 30. The high side of the speedway seemed to be the way to go for Terrance as he passed Willix for second on lap 34 but Willix charged back.

At halfway, Williamson was first, in front of Willix, Terrance, Bernier and Ladouceur completed the top 5 as the feature had a great momentum with no cautions slowing the feature. Fuller made a great move to pass Bernier for third on lap 45 after starting 22nd.

At lap 40, Terrance moved up to second as Tim Fuller made his way to the top 4 passing Willix.

With 50 laps in the books, Williamson remained the leader as Jordan McCreadie slowed in turn 3 and brought the first caution of the event.

On the restart, Williamson remained in front as Fuller pulled to second over Terrance, Michael Parent broke the front end of his ride and yellow was out on lap 56.

On the following green, Tim Fuller did a slide job over Williamson and grabbed the lead on lap 57 and pulled away from the rest of the field. The battles continued at the back of Fuller as Bernier claimed the third as the front 6 were all racing together.

Fuller led the final laps to win a second tour race in a row on the DIRTcar 358-Modified series after Can-Am last weekend over Williamson and Bernier who made a late charge.

The final race of the Southern portion of the DIRTcar 358 Series will be run at Fonda on September 21 for the Thunder along the Mohawk 100. The North portion is back in action next Friday as the series heads to Quebec for a double header at RPM and Drummond on September 21 and 22.