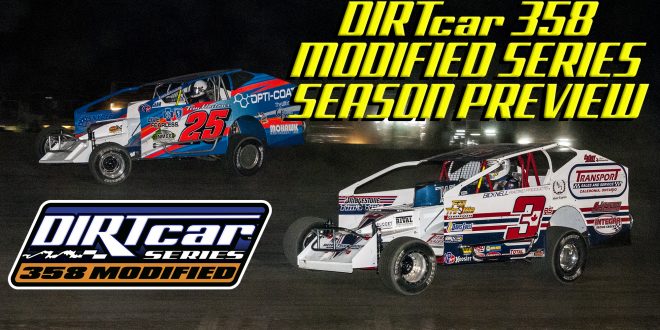 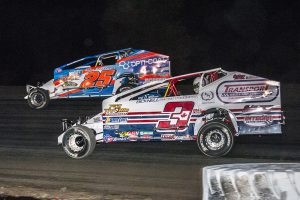 CONCORD, NC — This season marks the return of the unified DIRTcar 358 Modified Series schedule, with over $330,000 of purse and point fund money available over the course of 13 highly competitive events across New York State and Ontario. The season kicks off on Sunday, May 12, at Utica-Rome Speedway, and concludes with the $10,000-to-win Bullringer 100 season finale October 19 at Brockville Ontario Speedway.

“We have put an added focus on the DIRTcar 358 Modified Series and the 358 Modified class overall, and it’s showing a resurgence,” DIRTcar Northeast Director Dean Reynolds said. “We kind of turned the clock back a little and went with one series again, and set the schedule up to be as travel-friendly as possible. With the response from several of the 358 teams, I think it will be an exciting battle for the Championship, right down to the final event at Brockville.”

Each Series event pays a minimum $4,000-to-win, with $2,500 for second place and $1,500 for third. The season opens at Utica-Rome Speedway on Mother’s Day, Sunday, May 12. Series regulars will face a strong local field of DIRTcar 358s. Last year Billy Dunn, Marc Johnson and Pat Ward took the top three tops in the Hoosier Racing Tire Weekly Track Championship at Utica-Rome.

Next up is Can-Am Speedway on Wednesday, June 26. Can-Am is another haunt of the No. 49 358 Modified of Billy Dunn, the 2018 Track Champion. Three of the top drivers in points at Can-Am Speedway — Ryan Bartlett, Jordan McCreadie and Ryan Arbuthnot — will make a run at the Series Championship in 2019.

The next day, Thursday, June 27, the Series rolls into Fulton Speedway for the Showdown at Sundown 100. Defending Series Champion Larry Wight will certainly look to defend his home territory against Tim Sears Jr. and Ron Davis III. Sears and Davis rounded out the Fulton Speedway Track Championship podium in 2018 with Larry Wight on top of that as well. They’ll both take on the entire Series in 2019.

Corey Wheeler plans to make all the DIRTcar 358 Modified Series races in 2019. He’ll have home-track advantage when the Series rolls into Cornwall Motor Speedway on July 14, which is immediately followed by the July 15 Series race at Mohawk International Speedway. Last year Tim Fuller dominated 358 Modified competition at Mohawk. Can he hold off the Series regulars in 2019? Track Championship runner-up Lance Willix is taking on the Series in 2019, as well.

Plattsburgh Airborne Speedway’s Hoosier Racing Tire Weekly Championship field is looking stout for 2019. The Series will need to get by Mike Mahaney in the No. 35, who plans to make as many Series races as he can at his home track.

At the halfway point of the season, the Series returns to Can-Am Speedway and Mohawk International Raceway in September. October brings the traditional NAPA Super DIRT Week 358 Modified Series marathon starting with Utica-Rome Speedway on Tuesday, October 8. The next day, the Series swings into Weedsport Speedway, and then Brewerton Speedway on Thursday for the famous Hurricane 100.

Friday night of NAPA Super DIRT Week features the Friday Night Lights Triple 25 qualifiers for Saturday’s $20,000-to-win event at Oswego Speedway. Last year, Peter Britten won a stunner in front of a huge crowd in the 150-lap Feature. The purse for the Triple 25s is $10,100 and the 150 boasts a purse of $54,000.

Other drivers who plan to make all the Series races are Steve Bernard from Granby, Quebec, Tyler Meeks out of Evans Mills, NY, Andrew Spurback, and Chad Brachmann, who races weekly at Ransomville Speedway. Drivers looking to make the most of the schedule are Mat Williamson, Danny Johnson, Billy Whittaker and Kyle Dingwall. Clearly, there is no shortage of highly competitive DIRTcar 358 Modifieds to make these Series races truly special in 2019. Cagey veterans, wily rookies and drivers in their prime make up the genetics of a promising season of exciting DIRTcar competition.

In addition to the healthy purses throughout the season, $6,000 goes to the DIRTcar 358 Modified Series Champion as a part of a $25,000 fund. Furthermore, VP Racing Fuel offers $6,000 in fuel. The Hoosier Racing Tire Weekly Champion takes home $3,000 out of the $11,000 total point fund. Drivers and hands alike are excited for the 2019 DIRTcar 358 Modified Series season to get underway.