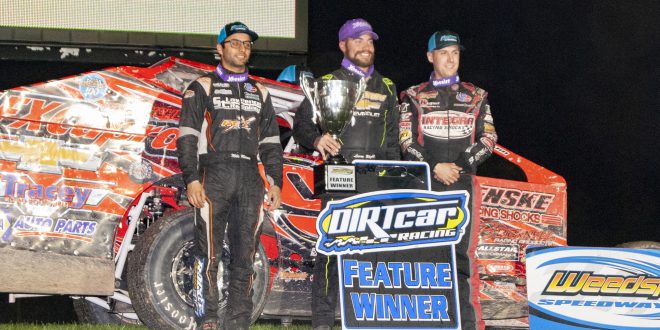 Wight was challenged by Mike Maresca on a lap 75 restart, where Maresca pulled even with Wight on the inside of turns three and four. Wight, however, was able to power off of turn four and clear Maresca.

“I was moving around there on the restart,” Wight said in victory lane. “The middle was really good in lapped traffic, but wasn’t where we needed to be for the restart.”

Before the green flag came out, fourth place starter and Billy Whittaker Cars Fast Time $100 award winner, Lance Willix, ducked into the pits prior to the start of the event due to a rear axle issue that he noticed when heating up the tires.

Maresca led the field to the green flag and stayed out in front for the first eight laps until Wight flew by on the outside groove. Wight was impressive as he worked his way through lapped traffic, going three-wide on multiple occasions.

The lead was erased on lap 32 when Pat Ward made significant contact with the backstretch wall, ending his night.

Mat Williamson was the man on the move, having to start at the rear of the field after breaking a rear axle while coming to the white flag in the fourth heat race. By the lap 32 yellow flag, Williamson had worked his way from position 29 up to the tenth spot.

Williamson would eventually crack the top five on a lap 66 restart and would inherit the fourth spot when Billy Decker ran into trouble and pulled his number 91 machine into the infield. On lap 96, Williamson caught Maresca and was able to take the second spot away. Lapped traffic was a factor for the second-place battle in the closing laps, as Williamson was slowed on the inside and Maresca used the outside to nip Williamson for second at the line.

“Were happy with a second-place finish tonight,” Maresca said. “The northern guys don’t typically finish well here; we just didn’t have anything for Larry.”

Williamson’s charge from the back had fans on the edge of their seats.

“We had a really good car tonight, but really used it up getting to the fifth spot,” Williamson said. “I can’t thank the guys enough tonight for thrashing on the car to get us out here for the feature.”

The DIRTcar 358-Modified Series returns to action on Thursday night for the Hurricane 100 at Brewerton Speedway.