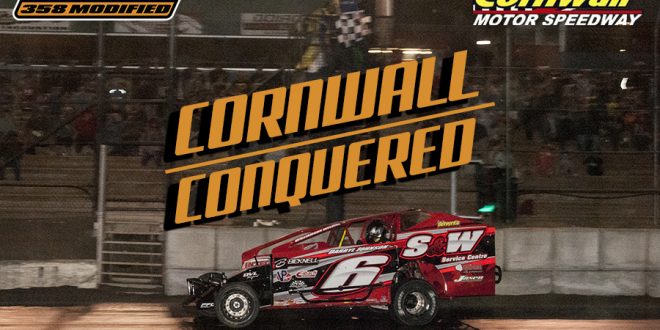 LONG SAULT, ON – July 14, 2019 – After letting a win slip through his fingers at Cornwall Motor Speedway last year, Mat Williamson had some extra motivation to park the No. 6 DIRTcar 358 Modified in Victory Lane this year. Williamson had to fend off major challenges from runner-up Mike Mahaney from King Ferry, NY who nearly passed Williamson on the final lap before a caution flag came out. Tim Fuller finished third and was reeling in the leaders at the end of the race.

Williamson has had a banner weekend picking up three Feature wins including Hoosier Racing Tire Weekly Championship events at Ransomville Speedway and Merrittville Speedway, but tonight it was all about the DIRTcar 358 Modified Series. Williamson came into Cornwall with the Series points lead and has now stretched that lead out further by winning another 100-lapper.

“We’re on a roll. That final caution (on lap 99) might have saved my race. I don’t know if Mike [Mahaney] would have gotten by us as I was fighting with lapped traffic. Mike raced me as clean as you can ask for and I thank him for that. We’re rolling right now and we’ve got one more to go,” a grinning Williamson told Series announcer Tim Baltz in Victory Lane.

The family-owned No. 6 started fourth and quickly entered the top three in the opening stages. Williamson dueled with Steve Bernard for the lead and got around him on lap 18. As only two caution periods interrupted the 100-lap race, he was forced to contend with some fast lapped cars on the slick bullring.

Williamson said, “It was very tough in traffic. We had a great car early but used our stuff up racing the around the No. 96 car. I was just happy to hang on. Last lap we were coming to the white flag and I just got visions of the No. 3RS going around me last year. I made the car wide as possible and luckily we’re here.”

Count Mat Williamson as a fan of Cornwall, “I love this place. The fans are awesome. The atmosphere is like going to a rock concert every time we come here so I’m happy to be here and happy to finally get it done.”

Meanwhile, Mike Mahaney was pleased with this best-ever effort at on the quarter-mile Long Sault oval. On several occasions, Mahaney looked like he was going to pass eventual winner Williamson. When the field took the white flag on lap 99, Mahaney drove in with a huge run on the No. 6 but suddenly the caution flag was displayed for a spinning Danny Johnson. On the restart, Williamson was too strong for Mahaney.

He noted, “This is definitely our best run here ever. I’ve always struggled with this place, especially in turns one and two. I want to thank Stephane LaFrance. He gave me some tips before the Feature and it really helped my driving.”

The DIRTcar 358 Modified Series is quickly gathering momentum and drivers and fans are taking notice. Last year’s incredible finish at NAPA Super DIRT Week was not a fluke.

“It’s awesome to be able to follow this tour and be able to do it for real. I haven’t had a chance to do this for a long time. It’s pretty cool running well and it was a great race with Mat Williamson. He raced me really clean and we caught him there a couple of times in lapped traffic but as soon as I showed him a nose, he would take off. I don’t know if he was saving his stuff or what. It was good racing. It’s a great track and a lot of fun.”

Wily veteran Tim Fuller crossed the finish line ahead of Erick Rudolph by a bumper. No. 19 was catching the two leaders and had a strong car on the long runs.

“I think I was really good towards the end until a caution would come out. It seemed like on warmer tires Mat [Williamson] was coming back. The No. 35 car was really fast. I thought he was gonna get him there at the end. That was great racing. I mean you can’t beat that right there, slippin’ and slidin’ around. No one knew until the very end who was going to win this.”

The Series is back in action Monday, July 15 at Mohawk Int’l Raceway for another $4,000-to-win DIRTcar 358 Modified. Williamson will be looking to extend his points lead, but about forty other drivers are hoping to take a bite out of it.

Jordan McCreadie is the lucky driver to pick up a certificate from Hoosier Racing Tire for one free tire. A random finishing position is pulled prior to the race and McCreadie, while not happy with a twenty-second-place finish, will get a free tire.

Long-time racer Danny Johnson lost a rear end during Time Trials and needed a provisional to start the race. After starting twenty-seventh, Johnson moved up to the sixteenth position.