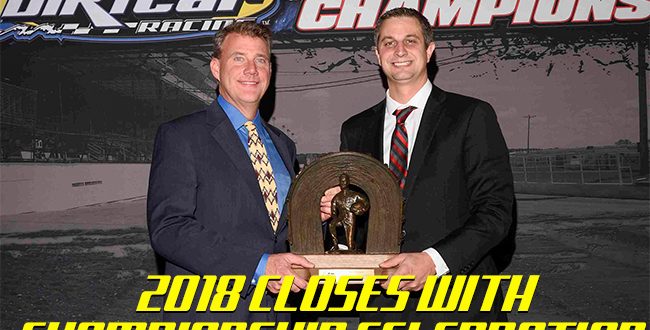 SYRACUSE, NY – November 19, 2018 – The DIRTcar Northeast racing family gathered together in Central New York to celebrate a year full of incredible racing accomplishments. For the seventh time, Matt Sheppard was called to the stage to receive the award for the Super DIRTcar Series Championship. For the first time in his career, Billy Whittaker Cars 200 winner, Larry Wight took home the 358 Modified Championship after his third-place finish in the season finale at Brockville Ontario Speedway. Sportsman Modified Champion Kevin Root and his family highlighted the ceremony with an emotional victory speech, as did Joycelyn Roy’s acceptance of the Pro Stock Championship award.

The phrase “seven-time Super DIRTcar Series Champion” is something Matt Sheppard will have to get used to hearing over the next year. Sheppard will go into 2019 looking to tie Brett Hearn’s eight-time Series Championship stat, a record few thought could ever be breached.  After absolutely dominating 2017, the 2018 season had quite a few unexpected challenges for Sheppard and his team.

“We had a couple fantastic years and fantastic luck and then it caught up with us. We had such good race cars that we were able to overcome the adversity. There’s a lot to be said about that.  We obviously didn’t have the year we had the last couple years. It says a lot about the two tables of people sitting here. They stuck by me and nobody gave up. Here we are celebrating at the end of the year.”

To Matt Sheppard and many others, the Championship Banquet is about one thing: Family. “Everyone is talking about family here tonight. A lot of people would stand here and look down here and see a sponsor, family, crew, engine builder, race car builder, header guy, another sponsor, and all I see is family. We’ve been together a long time.”

Sheppard sees the Super DIRTcar Series moving in a positive direction and welcomes the youth movement. “So many of the guys have said how much fun the Series is, the clean racing, the respect among the drivers. Everybody says the Series is a bunch of old guys, but then you see Erick and Max running second and third in points. They say it’s a bunch of old guys, but then a couple young guys come in and are nipping right at my heels. The Series is as alive as it has ever been.”

Larry Wight and LJL Racing had an incredible year. On this night Wight celebrated his first 358 Modified Series Championship, but he also took his first Billy Whittaker Cars 200 win in 2018 as well. Pat Ward finished right behind Wight in the 358 Modified standings making it a Gypsum Racing one-two.

Wight noted he has a lot to be thankful for: “What a great accomplishment for me to be able to get that 358 Championship. I remember a few years ago watching pat Ward get it and Stew Friesen picking it up over his head in the Victory Lane pictures. It’s one of those things, like chasing down guys like Matt Sheppard whose got all those Championships. Hopefully one day we can stand up next to him and say we raced as hard as he did. I gotta thank everyone who has ever helped me, my wife Brooke and my daughter Audrey, everything I do I do for her.”

Kevin Root won the overall Sportsman Modified Championship and the nine-race Central Region Championship in 2018. Root and his family were full of emotion and smiles all evening.

“It’s a dream come true. I’ve only been racing Sportsman for four years, but I’ve been racing my whole life. I’ve met a lot of great people. Alan Johnson, Danny Johnson, Billy Decker, Matt Sheppard, Larry Wight. They always let me lean on them. They are always giving me advice,” said Kevin Root.

Root knows who to listen to when it comes to advice on racing for Championships: “Matt Sheppard said it best when he went out on his own a couple years ago, you gotta surround yourself with great people, and that’s what we did,” commented Root.

Little Crew Chief Nicholas Root was in rare form at the awards ceremony, stealing the spotlight and the show. “My son is 10 years old and he’s a hell of a kid. He’s probably smarter than half the people in here.” Nicholas Root had some words for the team as well: “I’d like to thank my family and crew for helping us and especially my Mom for putting up with me and my Dad’s shit.” Kevin’s wife Krista was all smiles: “I am very proud of them. He’s put a lot of work into this, and it’s all paid off.”

Iconic French-Canadian Pro Stock driver Jocelyn Roy took the DIRTcar Pro Stock Championship for the third time in his career.  Despite it being the third time Roy has graced the banquet stage, his emotion and gratitude to his team, family, and friends was palpable. “On behalf of the car owner and to the officials of DIRTcar, all the teams, and their wives, thank you for the terrific season this year. I am very, very happy. We are in a small town in Quebec in a very small garage with big dreams.”

Among the drivers Roy wanted to thank Roch Aubin stood out because of his habit of loaning out race cars to drivers so they could keep on racing throughout the season, including Marc Lalonde who lost a motor at the Driven Racing Oil World Short Track Championships at The Dirt Track at Charlotte.

Another competitive crop of rookies raced their way through the ranks in 2018. Future Super DIRTcar Series competitor and Albany-Saratoga Speedway regular Jack Lehner was Rookie of the Year on the Big-Block Modified side. Ronnie Davis III was named 358 Modified Rookie of the Year while Tyler Reynolds earned the same title behind the wheel of a Sportsman Modified. Travis Welch impressed fans and drivers alike and was named the 2018 Pro Stock Rookie of the Year.

Super DIRTcar Series Rookie of the Year and second generation driver Adam Roberts put up a top-ten finish in his inaugural season.

And with that the 2018 DIRTcar Northeast racing season is complete. Champions were made, races were won, and every driver and crew member left it all on the race track each and every night for the race fans. Stay tuned for schedules and driver updates for the 2019 season.

FloRacing will once again provide live HD video coverage for the Super DIRTcar Series in 2019. Be sure to join our partners at FloRacing.com and subscribe.