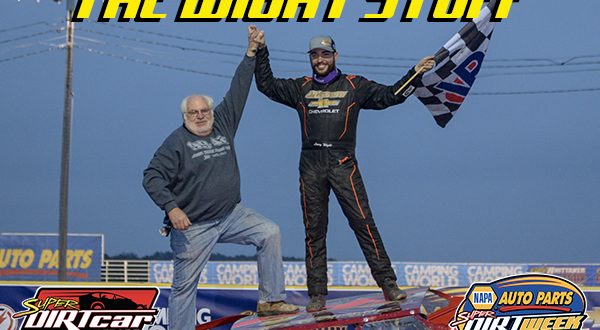 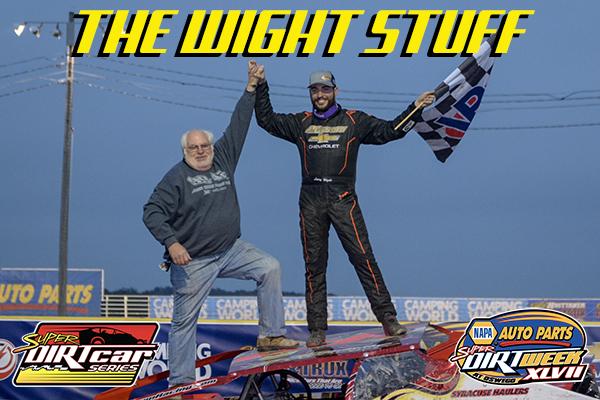 OSWEGO, NY – October 7, 2018 – Gypsum Racing driver Lightning Larry Wight pulled off a late-race pass on veteran driver Jimmy Phelps and held off the five-time NAPA Super DIRT Week Champion Stewart Friesen for the $50,000 pay day. Jimmy Phelps gambled on racing the entire Billy Whittaker Cars 200 without stopping for fuel or tires. Wight’s lap 73 pit stop equipped him with fresh tires, which shot him to the top of the score card in the final quarter of the race. Friesen crossed the finish line in second followed by the Camping World 150 winner Peter Britten.

With a grin as wide as the Victory Lane he celebrated in Larry Wight said, “It’s something I’ve been fighting for, for a long time since we started at Syracuse. To get on the boards here early at Oswego, it definitely means a lot for my family and the whole team.”

A new father, Larry Wight had family on his mind in Victory Lane: “I want to thank my Mom and Dad, my wife Brooke, my daughter Audrey, this is all for them. Everything I do is for that little girl. It’s an awesome feeling being a Dad and to come do this on top of it has got to make this greatest year I’ve ever had.”

A lap 73 pit stop for tires and fuel turned out to be the right call. While pole-sitter Jimmy Phelps attempted to stay on the race track for the entire 200 laps, Wight had new tires and confidence in his fuel situation meaning he could put the pedal through the firewall when he needed it. With the hammer down, Wight streaked passed second place Ryan Godown, and then immediately by Phelps in quick succession on lap 179 and 180.

On that pass and race strategy Wight noted, “I figured I could try and set him up to block and slow him down and it ended up working out. I knew he [Jimmy Phelps] was going to be conservative for fuel. I think they were trying to make it the whole way, so I knew he was conserving for fuel, and as long as I was pushing him, he couldn’t conserve too much.”

The race was far from over when Wight made the pass for the lead. Stewart Friesen was charging through the field in his tire tracks. Wight hoped to use Jimmy Phelps as a buffer between himself and Friesen, but that did not last long as Phelps faded and finally pitted for fuel with four laps to go. “I was just hoping that Jimmy could stay between me and Stewie. He was kind of my buffer car. I knew he was in limp mode,” Wight said. “We got back by him and we had that last caution with four to go there with Stewie right on us. He’s known for the last lap move. We just had to make sure we were hitting our marks and don’t worry about blocking. We knew our car was fast.”

Wight drove the no. 99L to victory with a Bicknell chassis beneath him and ace crew chief Scott Jeffery, who won four NAPA Super DIRT Week Championship at the New York State Fairgrounds with Billy Decker. This was Jeffery’s first win at Oswego Speedway. Wight discussed his racing line in the late stages, “It’s a fine line up there [on the high line] and you gotta trust your car. If you don’t drive it hard enough the car won’t set and if you drive it too hard you hit the wall,” Larry said laughing.

Five-time NAPA Super DIRT Week Champion and NASCAR Camping World Truck driver Stewart Friesen was pleased with his team’s effort but was left wanting more. “Those caution laps kind of killed us. I would have liked more green flag racing,” said Friesen. He thanked his team for their hard work as well: “I gotta thank Halmar Racing, DKM, Billy the Kid, and a lot of great product sponsors. I had a lot of fun here the last couple of days. We just came up a little bit short.”

Friesen pitted on the same lap as Wight and that proved to be the right call for both camps. “We’ve got some speed and Larry’s been due to win one of these for a couple years now. The pit strategy was pretty exciting. We got mud in our wheel there the one time and had to come back in. I didn’t know if we’d get back up there but we had a strong race car thanks you Halmar. Thanks to all the great fans that came out this weekend.”

Batman Peter Britten came up two spots short of his first NAPA Super DIRT Week Championship. Although not quite the heartbreaking last lap pass that lost him the race in 2017, Britten felt he was poised to win the race if not for changing track conditions. Britten noted, “Unfortunately for us the bottom cleaned off a little bit there towards the end and it turned into a one lane track. I just couldn’t get around guys on the outside when it got too dirty. After a restart, I could kind roll a couple guys but it’d just get dirty and I’d tuck back in. Unfortunately, two years in a row our strategy was close but no cigar. Congratulations to Larry. I know how tough it is to win this thing.”

Race strategy played a vital role in Britten’s podium finish. “We felt like using the high side was our best shot. We got ourselves in a position there on lap 120 or so wondering “Do we even get tires?” but we knew it was going to be a tire race.”Britten made a pit stop on lap 50, so his tires had twenty-three more laps on them than the top two finishers. The Graham Racing no. 21A pilot is confident that he would have won the race if the track changed the way his team thought, “For the way that the track changed, we just didn’t have the right strategy. We stuck to our game plan. I really feel like if the track didn’t rubber up I would have won the race, but it did so it’s irrelevant. All you can do is plan for what you think is going to happen. If you don’t think it’s going that way, you change the strategy, but we really felt that was the way it was going.”

NAPA Super DIRT Week XLVII will be remembered as one of the greatest weeks in dirt racing history. Every single Feature event had late-race passes for the lead, dramatic action, and engrossing race strategy. Ticket and camping renewals are available until November 14. 2018 ticketholders who want to watch the Super DIRTcar Series and DIRTcar Northeast top this year’s incredible racing, should call 844-DIRT-TIX. Tickets will be on sale to the general public on December 1.