Tim Fuller already knows the joy of winning the country’s most prestigious DIRTcar Big-Block Modified event – and, of course, would love to do it again.

With the WoO LMS idle until Oct. 13 at The Dirt Track at Charlotte in Concord, N.C., Fuller and McCreadie will spend the next five days in the Salt City battling for over $75,000 in first-place cash during DIRTcar Racing’s autumn festival of speed. Their schedules include not only the headline 200-mile Big-Block tilt but also the ‘Salute to the Troops 358-Modified 150’ on Sat., Oct. 9, and satellite Mr. DIRTcar 358-Modified Championship Series events on Thursday night (Oct. 7) at Brewerton (N.Y.) Speedway and Friday night (Oct. 8) at Rolling Wheels Raceway Park in Elbridge, N.Y.

Fuller, 42, of Watertown, N.Y., is continuing his tradition of making sure to fit Super DIRT Week into his annual itinerary since shifting his focus to dirt Late Models in 2007. While McCreadie didn’t compete at the Syracuse Mile from 2006 – the year he won the WoO LMS championship – through 2008, Fuller has been a Columbus Day weekend fixture at the venerable track.

“I enjoy going (to Super DIRT Week) because it’s still one of the premier events in the country,” said Fuller, who won the SEF Small Engine Fuels 200 in 2004 and 358-Modified 150 in 2005. “I really enjoy race day (of the 200) and the challenge of trying to win the race. I’ve always said that you haven’t made it in Modifieds until you’ve won it.”

Fuller, who has won twice on the 2010 WoO LMS and currently ranks eighth in the points standings, will make his Super DIRT Week assault for the second consecutive year in equipment fielded by the Smith Brothers Concrete team, a long-running Big-Block Modified operation from the Middletown, N.Y., area that is co-owned by Steve Hastings and Joe Knoth. Fuller joined the team last year to run selected Big-Block Modified events and has gotten very comfortable with the arrangement.

“It’s a great deal for me,” said Fuller, a former champion of the overall Hoosier Tire-VP Racing Fuels Mr. DIRTcar Big-Block Modified (2005) and Mr. DIRTcar 358-Modified (2003 and 1993) points races. “I’m real fortunate that (Hastings and Knoth) provide me such great stuff to drive in Modified shows. They take care of everything and make it real easy on me. My uniform is even dry-cleaned and hanging in the trailer when I get there (for a Modified race).”

Fuller, who will run Teo-Pro No. 74 cars from the team’s stable in both Big-Block and 358-Modified action during Super DIRT Week, will attempt to improve on a 2009 Syracuse performance that was good but, with a few breaks, could potentially have been great. He won the pole position (for the second straight year) and finished third in the 200 but lost second place to McCreadie on a late-race restart, and in the 358-Modified 150 he had a certain runner-up finish snatched from his grasp when his car’s fuel tank ran dry on the final lap.

“That was a lot of money we had slip through our fingers last year,” said Fuller, who earned over $20,000 during last year’s Super DIRT Week (third-place in the 200 was worth $15,000) but lost 20-grand more thanks to his single position drop in the 200 (McCreadie pocketed $25,000 for finishing second) and heartbreaking ceding of a $10,000 second-place finish in the 150. “I hate to even think about it, but what’s done is done. We still made some money and hopefully we can make some more this year.”

McCreadie crossed the finish line last year 2.682 seconds behind winner Matt Sheppard of Waterloo, N.Y., but he felt the tables could have been turned if he hadn’t experienced one very tough break. He had moved up to fifth-place from the 28th starting spot when every lead-lap car remaining on the track came down pit road on lap 121 to fulfill their mandatory post-lap 100 pit stop requirement, but he lost valuable track position because he got boxed in behind the car driven by New Jersey’s Ryan Godown. Thus T-Mac restarted 14th, forcing him to spend the remainder of the distance battling to get back into contention.

McCreadie returns to the ‘Cuse this year with the same Big-Block Modified he drove there in 2009. Fielded by the Sweeteners Plus team that also supplies his familiar No. 39 dirt Late Model equipment, the Bicknell car has a proven track record at the Mile. McCreadie was a contender for victory with the mount in both the 2004 and 2005 events before experiencing mechanical trouble, and his Sweeteners Plus teammate, 2008 WoO LMS Rookie of the Year Vic Coffey of Caledonia, N.Y., drove the machine to his second career SEF Small Engine Fuels 200 triumph in 2007. Coffey also ran the car in the 200 in 2008 (he dropped out early due to broken right-front spindle), but he decided to turn the mount over to McCreadie last year and prepare a new car for himself.

The car will be powered by the same Chuck Cici-built big-block engine that was under its hood last year – McCreadie and his chief mechanic, Al Stevens, picked up the freshened motor in Ohio on their way home from last month’s WoO LMS event at I-55 Raceway in Pevely, Mo. – but there will be one noteworthy difference from the machine that McCreadie rolled onto the starting grid one year ago. The car now sports a completely reworked front clip – not the hastily-repaired, second-hand clip that was welded on it last year.

After McCreadie hit a rut in the track during a pre-qualifying practice session and badly bent the car’s front clip, his team had to perform an amazing repair job just to get their only vehicle race-ready for time trials two-and-a-half hours later. They cut off the car’s damaged front clip and replaced it with a clip from a used Bicknell frame that was in a nearby racer’s shop. After doing some quick welding work and piecing the front end back together, McCreadie was on the track in his assigned qualifying spot – but of course, the car wasn’t exactly 100 percent for the remainder of the week.

McCreadie, who will drive Vinny Salerno’s Four-Star Transmissions Motorports car in the 358-Modified 150 and the small-block satellite events at Brewerton and Rolling Wheels (McCreadie won last year’s Super DIRT Week show at Brewerton), is hoping his time has come for a Syracuse celebration. He got a taste of posing in Victory Lane in front of the massive Fairgrounds grandstand when his father won the 200 in 1986 and yearns to get there himself, allowing him and his dad to join the late Toby Tobias Sr. and Richie Tobias as the only father-son combos to win the SEF 200.

“It would be huge if I could win it,” said McCreadie, who has four WoO LMS wins this season and sits third in the points standings. “I grew up with Syracuse always being the big deal every year. All the major Modified guys over the years have won it, so it’s definitely one of the things I look at that I’d like to put on my resume.”

Super DIRT Week www.superweekonline.com finally has arrived leaving precious time to order your tickets for the most prestigious event in Big-Block Modified racing. Advance sale ticket orders are now being taken at the NYS Fairgrounds office by calling 315/552-9912 and 315/552-9914, or by contacting DIRTcar Racing Northeast Headquarters at 315-834-6606. More information can also be found at www.superdirtcarseries.com and www.dirtcar.com. 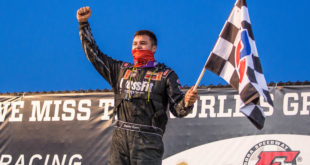 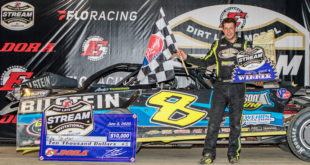