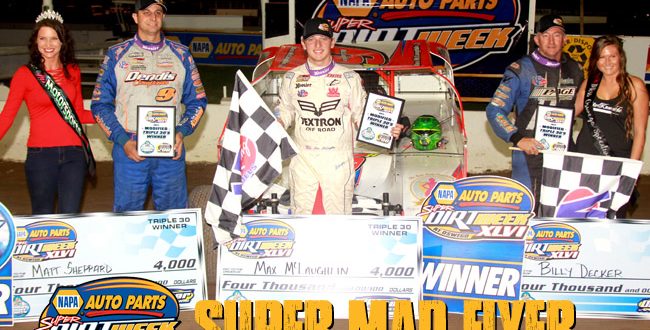 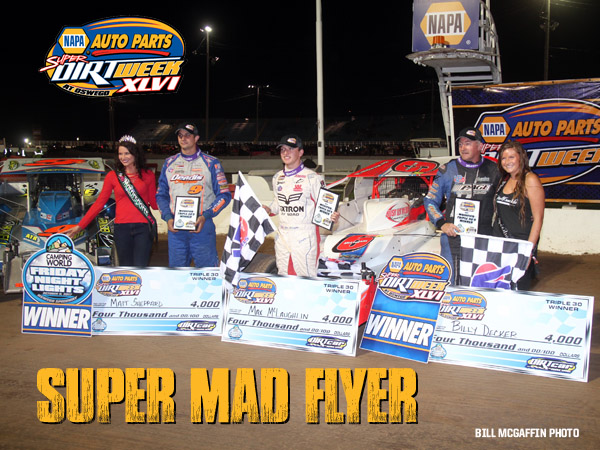 Just as Sheppard started to move to the top of the track, the battle behind the Waterloo, NY driver started to heat up for the runner-up spot between Flach, Varin and Tim Fuller.

Sheppard, who finished second earlier in the night in his 358 Modified qualifier, wouldn’t be denied in his Big-Block Modified.

“This Big-Block has been pretty good since we unloaded; the Small-Block is pretty close, but it’s not as good as this thing is,” said Sheppard. “I can’t thank all of these guys enough. It’s been a long week so far, but we’ve got a hotrod here.”

On the final circuit around the 5/8th-mile Varin would get by Fuller to round out the top three spots in the first qualifying race. Flach, who was locked into Sunday’s finale by virtue of qualifying inside the top six on Thursday afternoon, finished fourth.

Sheppard will lead the field to the Green Flag in the Billy Whittaker Cars 200 after setting a new track record during Thursday’s Time Trials.

During the second of three qualifying races, Max McLaughlin picked up where he left off earlier in the day by topping the speed charts in the only practice session for the NAPA Super DIRTcar Series Big-Block Modifieds.

The win didn’t come easy as the young 17-year-old from Mooresville, NC started in the third position. In the opening laps, Mad Max worked his way by Dom Buffalino for the runner-up spot and set his sights on Hellertown, PA’s Rick Laubach.

While the top-two of Laubach and McLaughlin were battling it out, Justin Haers and Mike Mahaney were in their own battle for third place. Haers running the low line got a little too low as he clipped the inside jersey barrier and flattened his right front tire. Still driving on the flat tire, Haers only relinquished one spot to Mahaney as the both came home third and fourth.

Back out in front of the field, Laubach and McLaughlin started to pick their way through traffic in the final laps. As the two headed into Turn 1, McLaughlin threw his No. 6h to the outside and made it stick, giving him the run off two into the lead as they rocketed down the backstretch with four laps to go.

2016 NAPA Super DIRT Week Futures winner, McLaughlin would check out from the rest of the field and pick up his third Big-Block Modified victory of the season and his second career victory at Oswego Speedway.

“Victory Lane two years in a row, this one is a hell of a lot better than the Futures race,” said Max McLaughlin. “This means a lot. I can’t thank Al Heinke enough for putting me in this racecar. He believed in me and saw something in me. He’s let me drive this car this year, and we’ve had a great year with three wins and we’re gunning for more. [Confidence] is huge. This is closest to the racetrack that we’re going to have for Sunday — black and slick as can be. We didn’t start on the pole; we had to work our way forward and got the lead with five to go by making a move around the outside. I saw lap traffic stacking up, and [Laubach] just waited, and just I made a move.”

The final race of Camping World Friday Night Lights saw Super DIRTcar Series points leader Decker get an early jump on Tremont. The next time by the line Billy Dunn would get under Tremont for second. As the top-two running drivers made their way into lap traffic, Dunn started to eat into Decker’s lead, but the Unadilla, NY driver in the No. 91 proved to be too strong for the No. 49 and Dunn.

Sheppard and Decker, who were already locked into the Billy Whittaker Cars 200, will roll off the grid in the first and third positions respectively. McLaughlin will line up seventh with his victory.

The Super DIRTcar Series will have a Last Chance Qualifier showdown that will qualify 10 more cars for Sunday’s granddaddy of all Big-Block Modified races, followed by two of the final practice sessions.

Saturday night at Fulton Speedway the Big-Block Modifieds will share the stage with The Greatest Show on Dirt, the World of Outlaws Craftsman® Sprint Car Series, with the Win and You’re In 25-lap showdown, earning the winner the 41st starting spot in Sunday Championship at Oswego Speedway.