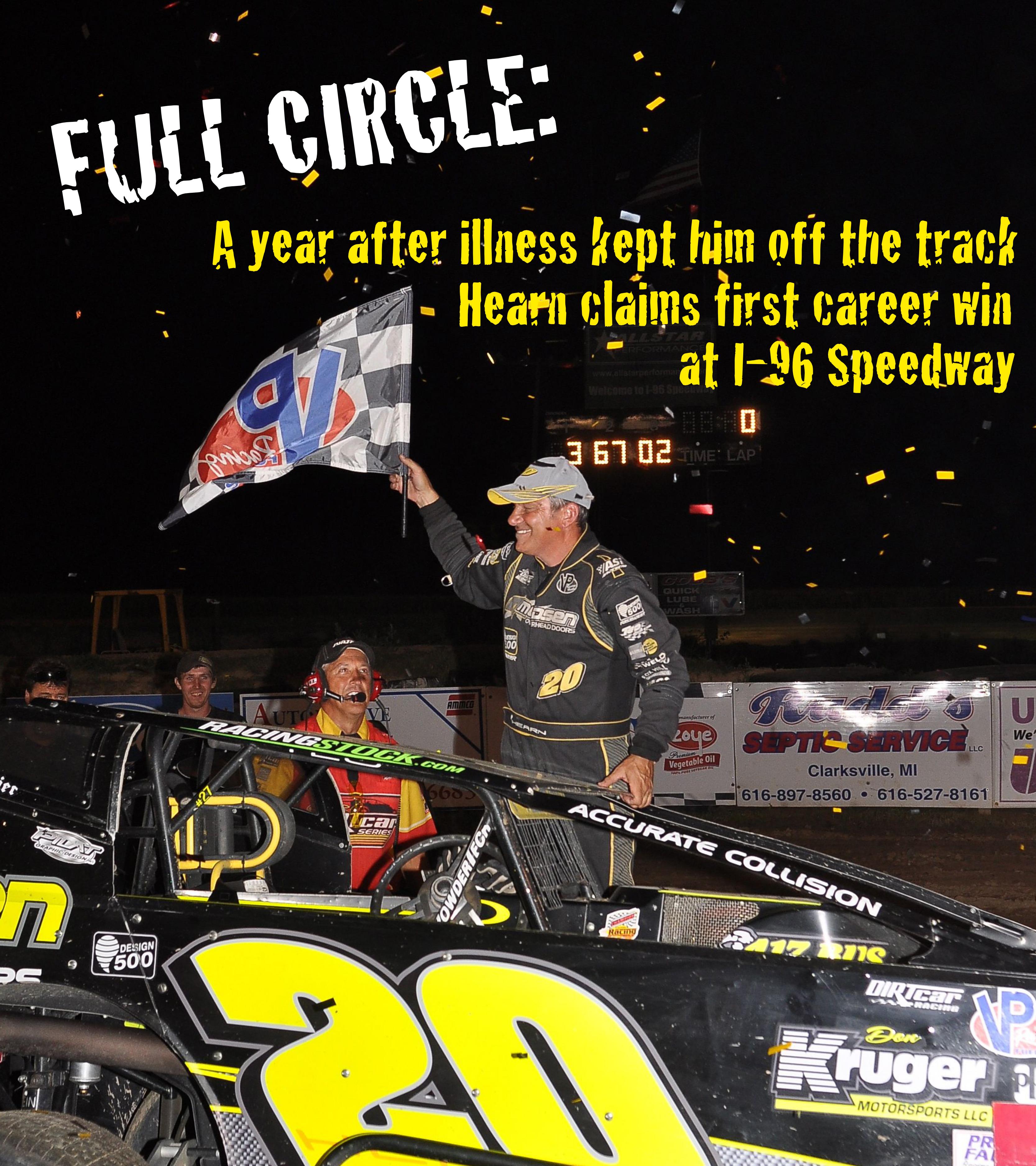 What a difference a year makes: Brett Hearn claims first win of career at I-96 Speedway

Illness kept Hearn from making Michigan trip last year, this year “The Jet” is stronger than ever

LAKE ODESSA, MICH. – Monday, August 7, 2013 – A year ago Brett Hearn couldn’t race, with sudden illness keeping him from traveling with the Super DIRTcar Series for its inaugural race at I-96 Speedway. Now he’s come full circle, not just making a full recovery, but picking up a win after leading all 100 laps there in Tuesday’s “Michigan 100” with his first-ever attempt at racing the half-mile clay oval.

“Just when I thought I couldn’t see a new track, or win at a new track, we come here, and it was awesome,” said Hearn, whose return to the series last August brought him victory at Lebanon Valley’s “Mr. DIRT Track U. S. A.” and later on wins in the prestigious NAPA Auto Parts Super DIRT Week VP Small Engine Fuels 200 and Orange County Fair Speedway’s Eastern States 200. “When I couldn’t make this trip last time around, we didn’t know what was going to happen. I’m glad to be here this year and I hope to come back here next year. It was a blast.”

Hearn’s Madsen Overhead Doors No. 20 was fast off the trailer, clocking an 18.818-second lap in time trials, second only to Pete Britten’s 18.461 seconds. The Sussex, N. J., driver then piloted the No. 20 to a heat race win and claimed the second spot on the grid in the redraw.

Starting the feature in the front row put Hearn in a good position to succeed at the “Michigan 100,” but it wasn’t without challenge that he stayed ahead of the pack. After he sped ahead on the outside groove past pole-sitter Keith Flach, several early-race cautions kept him from carving out a significant lead.

The yellow flags, one in lap 3 brought by Justin Haers’s Phelps Cement Products No. 3 slowing due to engine problems, followed by a lap 24 caution with Pete Britten spun out in turn 1 and another in lap 29 due to a flat on Justin Wright’s No. 19, opened the door for three-time consecutive Super DIRTcar Series Champion Matt Sheppard. Fast on each double-file restart, Sheppard was able to pick off cars and work his way from seventh at the green flag to second in lap 48.

“I did pretty much all my passing on the restarts,” said Sheppard, of Waterloo, N. Y. “If you get on the top lane on a restart, you can pass some cars.”

However, even his strength on restarts wasn’t enough to catch Hearn, who early in the race found speed on the outside. Hearn took the top on every double-file restart, and was no match for Sheppard’s advances. Hearn cruised to victory lane in his first-ever run at I-96 Speedway, and Sheppard picked up second-place finish after two series wins in a row.

“Just when I thought there wasn’t a track ion the country I haven’t been to that I could get to run these Big-Block DIRT Modifieds and win the race, lo and behold, we got one here, first time ever seeing the track,” Hearn said. “I had such a good car at the beginning of the race. My main concern was whether it was going to be good at lap 80, lap 90.”

Sure enough, Hearn’s ride stood the test of endurance, staying as fast in lap 90 as it was in time trials. Hearn’s win also took him to the top of the Super DIRTcar Series Championship point standings. Before the race, he trailed Matt Sheppard by just two points.

Sheppard, nonetheless, was pleased with a second-place finish at the unfamiliar Midwestern track.

“The track threw us a little bit of a curve ball, but we had a good car tonight, happy to get second,” said Sheppard, who claimed victory the previous night, Monday, Aug. 5, at Merrittville Speedway. “It was a good week up here for us.”

“It was a good run for us. We definitely didn’t have anything for Brett. Even if our car was a little better, it would have been tough to pass him,” Sheppard continued. “The second time here you don’t really know what it’s going to do. Lots of places we go to it could look one way, and we pretty much know what’s going to happen in the feature. It’s just tough telling with a place you don’t come to – that nobody’s ever come to, just a couple of times.”

Sheppard pinpointed his weakness in tire choice. The JB Motorports 9s team, taking lessons from last year, set the car up with the same tires Danny Johnson used when he claimed victory at I-96 Speedway in 2012. In an unpleasant stroke of irony, Hearn’s tire setup was the same as Sheppard’s last year, and ended up being ideal for Tuesday’s track conditions.

“We learned a little something last year. We missed on tires, we ran on what Brett had, and this year we had what Danny ran on last year,” Sheppard said. “We had a good car tonight.”

Rounding out the top ten are Dale Planck in sixth, Brian Swartzlander in seventh, Matt Billings in eighth, Danny Johnson in ninth, and Pete Britten in tenth. 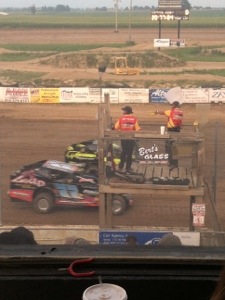