CONCORD, N.C. – Feb. 4, 2015 – DIRTcar 358-Modified racers will have more incentive than ever to race not only their home tracks this season, but also the series in the fall.

In addition to the traditional post Labor Day series events, drivers will earn points during the season from the new Super Series Starter (SSS) Events at their weekly tracks. The 2015 358-Modified Series Championship combines Home Track Points, plus “SSS” points, plus points from the Fall Series events to equal the Championship.

The weekly track Mr. DIRTcar program similar to last year’s runs from now until Sept. 6 and will count a racer’s best 16 finishes toward the Mr. DIRTcar 358-Modified Championship, which totals more than $16,000 in cash and contingencies. Racers must compete in 70 percent of the scheduled events to earn Home Track Bonus Points.

The DIRTcar 358-Modified Series Championship takes center stage in the fall, with three point-earning programs. In addition to Home Track Bonus Points earned by Sept. 6 and nine Championship Series points-paying events that run from Sept. 6 through Oct. 23, a new way to earn points is being unveiled. The SSS events give tracks a chance to designate up to three of their races during the season as Home Track SSS events. A separate point system using the 60-point system will award every participating driver with their best three finishes, with a maximum of 180 points for three victories.

The full schedule of “SSS” events will be released in mid-February.

The Home Track “SSS” points will be awarded to a driver and may be collected at any Super Series Starter event at their home track, or any other 358-Modified weekly track. The events can be a regularly scheduled night or a special event during the season, but must be scheduled in advance and published. A track can make any of the three races a NAPA Super DIRT Week qualifier, too.

The nine post Labor Day Series events will determine a champion and award the top 15 drivers at the year-end banquet. A point fund of more than $32,000 in cash and contingencies has been established. The champion will be determined by a combination of Home Track Bonus Points, Home Track Super Series Starter (SSS) Points and Series Championship Points. 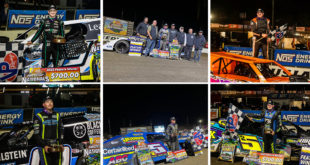 WHAT TO WATCH FOR: UMP Modifieds Set for Six-Straight Nights at Volusia’s DIRTcar Nationals