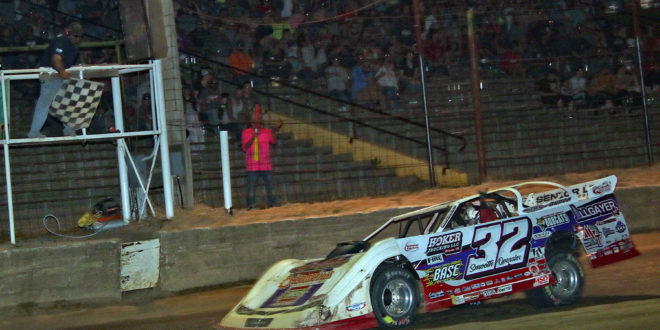 Make it three-straight trips to Victory Lane for the reigning champion.

Twenty-two years after father Bob took the checkers in the DIRTcar Summer Nationals’ debut at Shadyhill Speedway in July of 2000, son Bobby Pierce has done the same, winning the Hell Tour’s return to the 1/4-mile for the first time since 2018 Thursday night.

From the drop of the green, Pierce had the car to beat. He grabbed the lead from the pole on Lap 1, but not without some good fortune prior to the first lap.

On the initial start, outside polesitter Chad Finley, of St. Johns, MI, got a great run on the outside of Turn 2 and appeared to have the advantage on Pierce heading into Turn 3. But as Devin Moran and Thomas Hunziker tangled in Turn 2 behind them, the caution flag waved, forcing the field to restack and try it again – much to Pierce’s delight.

“I was probably going to have to race [Finley] for a while if I was going to try and pass him,” Pierce said. “I got that second start going and made sure I got to the top as soon as I could, and got it done.”

Now with a second chance at the start, Pierce got the jump he needed on Finley the second time around. He quickly took the lead and headed right for the top side, which caught-on with the rest of the field behind him as well.

“Track had a top side there early on and it was pretty fun for a few laps, but I knew it was only a matter of time before it started to move down,” Pierce said.

When the preferred lane came in around the middle, Pierce and the other leaders moved down to use it for the remainder of the race. Several caution flags dotted throughout the rest of the race forced Pierce to stay vigilant on the restarts, which was no issue for the four-time champion.

Pierce crossed the line, having led all 40 circuits, largely unchallenged for his 47th career victory with the tour, seventh of the season and third in-a-row, going back to last Sunday at Tri-State Speedway.

Fifteen-year-old Tristan Chamberlain scored his best career finish on tour in second with Finley right on his tail in third. Joe Godsey earned his second top-five finish of the season in fourth, while Brian Shirley rounded out the top-five.

The DIRTcar Summer Nationals Late Models are back in action Friday night, July 15, at Farmer City Raceway for the final stop of the season in Illinois. If you can’t be there in person, watch every lap live on DIRTVision.