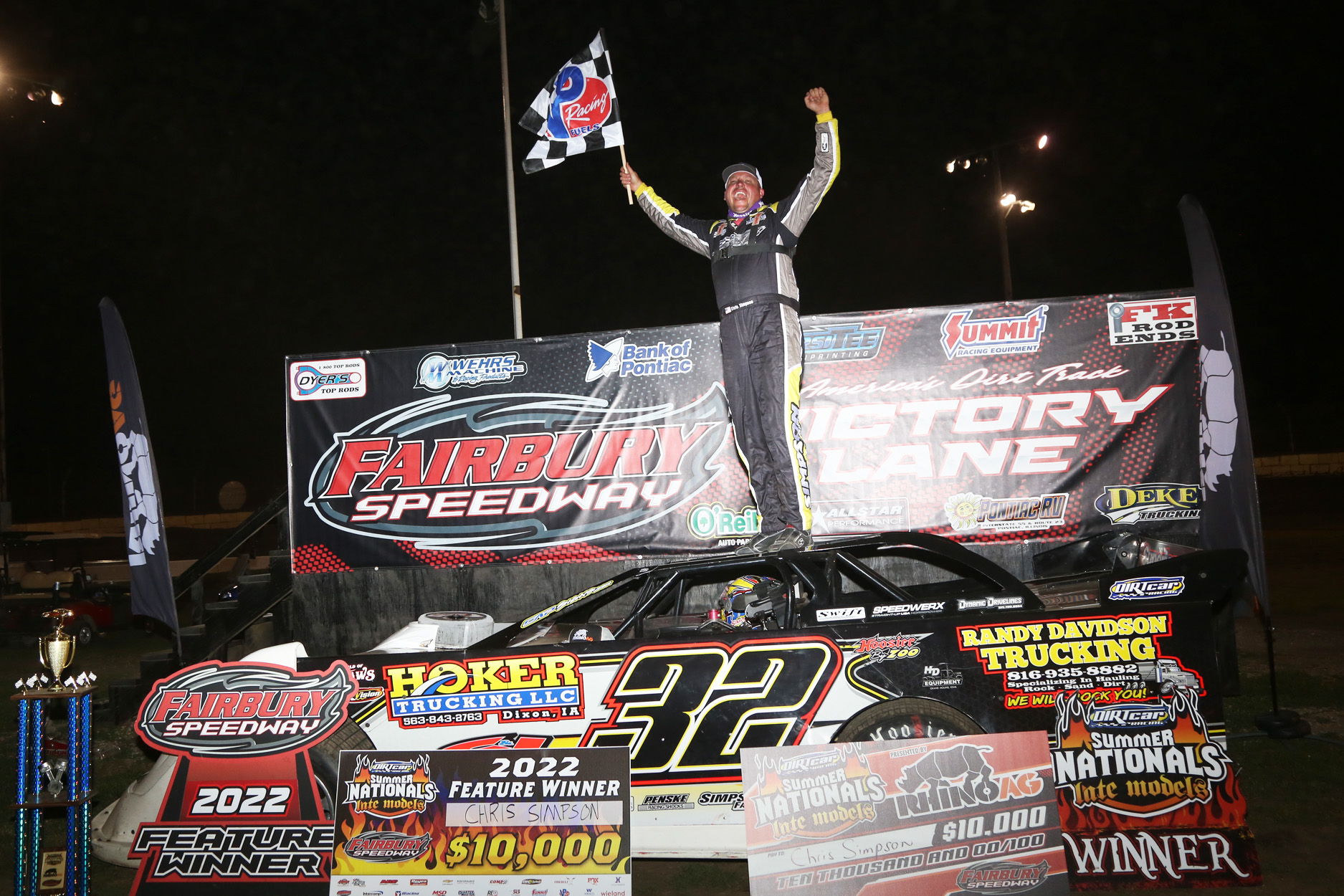 Two starts, two wins. Chris Simpson has been hotter than the Hell Tour this week.

Thursday night in his home state of Iowa, he won. Saturday night at Fairbury Speedway in Illinois, he did it again, besting a stacked field of 48 other drivers to stake claim to the second $10,000 check of the 37th DIRTcar Summer Nationals season.

Simpson set Quick Time in the sixth and final group of Qualifying before going on to win his Heat Race and redrawing the pole for the Feature. Outside polesitter Nick Allen got the jump at the drop of the green and led the race through the first 23 laps with several restarts along the way, until Simpson and the rest of the top-five got the jump on him.

Simpson, of Oxford, IA, threw his Longhorn Chassis #32 to the outside into Turn 1 as fourth-starting Tanner English did the same to Allen’s inside. By the time they came back around to the stripe, Simpson had the upper hand and control of the race with one half left.

Simpson held strong out front until Erb brought his A-game with him to the low groove, moving past him with 15-to-go. But that lead didn’t last long. Simpson stuck to the high line and wound-it-up on the banking, then uncorked a slide job to take the lead back with 10-to-go.

“[Erb] kept getting under me and I kept getting a run off of Turn 2 where I’d get back ahead of him,” Simpson said. “I went down in front of him to try and slow him down, and then he ended up getting by me and the top started cleaning up really good.

“I got a run down the front-stretch and he kept going way out wide. I got a run off of Turn 2 and went down into 3 and slid him, got in front of him, and a lap later the caution came out.”

The yellow was indeed displayed, twice more, both with an extra bit of pressure coming back on Simpson for the restarts.

Behind him, an epic climb through lapped traffic for reigning champion Bobby Pierce. After suffering electrical issues in Qualifying and his Heat, Pierce took a provisional and started 22nd on the grid.

Five laps in, he was 15th. Fifteen laps down, he had cracked the top-10. He cracked the podium on Lap 31, using his signature high-side to make the moves, and topped it off with a pass for second on Lap 41.

Under caution for the last couple restarts, Simpson got the idea he was getting closer by the lap.

“I could hear them say on the [one-way driver radio] that 32 was in fifth, then third, and then second,” Simpson said.

But Simpson hung tough through the restarts to bag his second Feature win in two starts.

“I got the best crew help I’ve ever had,” Simpson said, reflecting on the weight of his two Hell Tour victories this week after going nearly seven years since his previous one. “I got the best crew chief – my crew chief Chad Simonson. I’ve told this to my sponsors the last four years… I said, ‘Listen, I have the best help I’ve ever had.’ There’s no reason I can’t go out here and win these races.”

The season-opening Illinois-Iowa Week wraps up Sunday evening, June 19, with a visit to Sycamore Speedway in Maple Park, IL. If you can’t be at the track, stream it live on DIRTVision. 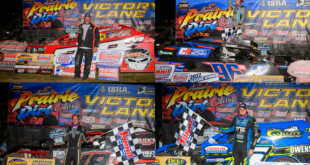