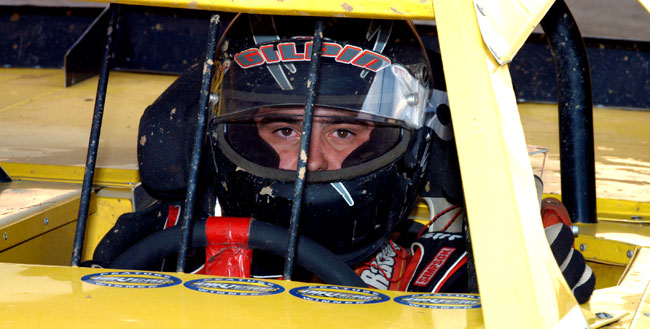 CONCORD, NC – Dec. 20, 2012 – There was never any doubt about Devin Gilpin’s focus for the 2012 DIRTcar UMP Modified season. After two runner-up finishes in the organization’s national points standings in the last three years, it was championship-or-bust for the budding young star.

Gilpin, 22, of Columbus, Ind., accomplished his objective – in spectacular fashion, no less.

Thanks to arguably one of the greatest campaigns in the history of DIRTcar UMP Modified racing, Gilpin became the 12th driver – and just the second from Indiana – to win the open-wheel division’s national crown since 1994. He will receive a $20,000 points-fund check and championship trophy for his achievement during the 29th annual DIRTcar UMP ‘Night of Champions’ Awards Banquet on Jan. 5, 2013, at the Crowne Plaza in Springfield, Ill.

“The championship was definitely the goal,” said Gilpin, who joined fellow Hoosier Dan Hamstra (2006) as a UMP Modified national title holder. “I ran second in (national) points in ’09 and ’10 so that gave me plenty of incentive, but really, (UMP) Modifieds just mean a lot to me. My father (Todd) and grandpa (Don Fleetwood) raced them and I’ve been running them since I was 14, so this is something we’ve been trying to get done for a long time.”

Ascending to the top of the UMP Modified world is poetic justice for Gilpin, who’s not exaggerating when he says his “whole life” has revolved around the division. He started attending UMP Modified races as a baby, was working on the family Mod as soon as he could turn a wrench and – after spending about seven years racing go-karts and one driving a four-cylinder Mini-Stock – found himself behind the wheel of a UMP Modified as a fresh-faced teenager in 2005.

“I’m not saying I wouldn’t want to do anything else (in racing), but I love the (UMP) Modifieds,” said Gilpin. “When I was growing up I always paid attention to the UMP (Modified) points. I remember when (current dirt Late Model standouts) Jimmy Owens and Mikey Marlar were running Modifieds all the time and winning tons of races, so for me to finally win the national championship is pretty cool.”

Gilpin harkened memories of Newport, Tenn.’s Owens – a winner of a record four UMP Modified national titles before moving on to dirt Late Model stardom – with his amazing march to the 2012 crown. He led the DIRTcar UMP circuit with 36 feature wins, propelling him to the national championship by 40 points (2,346-2,306) over Nick Allen of Wheatfield, Ind.

“You gotta race smart,” Gilpin said of the strategy necessary to chase the title. “You gotta go where you know there’s gonna be 30 cars and you can win. I went to a lot of big races and I won a lot of big races, but I also wanted to make sure I went to races with at least 30 cars where we could have a decent shot to win and get the maximum bonus points.”

Gilpin seized control of the national points early in the season, winning 23 of his 36 A-Mains before the calendar turned to July. His springtime rush on Victory Lane was highlighted by an incredible Memorial Day weekend that saw him win five times in as many starts.

“I didn’t expect a streak like that. It was unreal.”

Gilpin remained red-hot after the holiday weekend, rolling up 11 triumphs in 13 starts from May 24 through June 16. The surge put him atop the points standings, allowing visions of the national title to begin dancing in his head.

“The middle part of the year I was really confident,” Gilpin said of his outlook on the points. “I didn’t think there was no way anyone could beat us. By that point in time I had won 25, 26 races, so I thought, If I win 30 races, there’s no way anybody could catch me.”

Gilpin experienced some anxious moments, however, when Allen caught fire as the season wound down. Allen won 16 of his 29 overall features from mid-July through the early-October close of the points season, including one stretch of seven consecutive victories.

“There at the end Nick Allen had me worried,” said Gilpin. “He’s a good race car driver, and he got to knocking off win after win for a couple weeks and caught up quite a bit. I thought he might go right by us.

“My grandpa told me with about three weeks at go, ‘You won’t have to win another race and you’ll win (the championship).’ I knew I had scored more bonus points than anybody, but I still didn’t believe him because I figured Allen could get past me if he won a few more races. To be honest, I didn’t think it was sewed up until maybe the last race (the DIRTcar UMP Nationals on Oct. 6 at Eldora Speedway in Rossburg, Ohio).”

Gilpin finished a disappointing 26th in the points season finale at Eldora, but that was immaterial because he had already clinched the title before the race even began. His performance record – 56 top-five finishes in 82 starts during the points season – was just too strong to be beaten. In all, he won features at 13 tracks in four states, including eight victories at Moler; six at Brownstown (Ind.) Speedway; five at Portsmouth; three at Lawrenceburg and Lincoln Park Speedway in Putnamville, Ind.; two at Terre Haute, Kankakee (Ill.) County Speedway and Windy Hollow Speedway in Owensboro, Ky.; and one each at Brushcreek Motorsports Complex in Peebles, Ohio, Fairbury (Ill.) American Legion Speedway, Paducah (Ky.) International Raceway, Shadyhill Speedway in Medaryville, Ind., and Vermilion County Speedway in Danville, Ill.

“It’s an awesome feeling to win 36 races,” said Gilpin. “It really does blow my mind. In 2009 and 2010 I won 21 races two years in a row, so I kind of knew what it was like to win a lot of races. But I never would’ve thought I’d win 36 of ‘em in one year. It lets all the other guys know you’re serious about it when you can win each and every night like that.

“The thing I’m proud of is that we did it all with one car and a couple of motors,” he added. “I take pride in racing more than 80 nights with the same car. It was never even clipped (with new frame rails) once. I took the same car to the IMIS show (in Indianapolis on Dec. 6-8) and it looked just as good as any of the brand-new cars there. I think that shows just how good a car Donny (Jumper) builds.”

Gilpin credited many people for his successful season, including his family members, crew and sponsors like A-1 Pallet.

“Everything we accomplished came from having a good race car with a good motor and good people around me,” said Gilpin, who is single and works at his grandfather’s Dasco Race Supply. “I had a good maintenance program – my whole team was on the same page – and I had my grandpa, who was the brains behind the whole deal. He always had the car fast every week. I just drove it.”

The future appears bright for Gilpin, who has plans to test his skills in a locally-owned dirt Late Model on at least a few occasions in 2013. He also has an opportunity to put his name in the DIRTcar UMP record book as just the fourth driver in two decades to win back-to-back UMP Modified national championships.

And for a DIRTcar UMP Modified loyalist, there could be nothing better than that.

Ticket order forms for the 29th annual DIRTcar UMP ‘Night of Champions’ Awards Banquet on Jan. 5, 2013, at the Crown Plaza in Springfield, Ill., are available on-line at www.dirtcarump.com under ‘Downloadable Forms’ or by calling the UMP office at 618-450-2072.