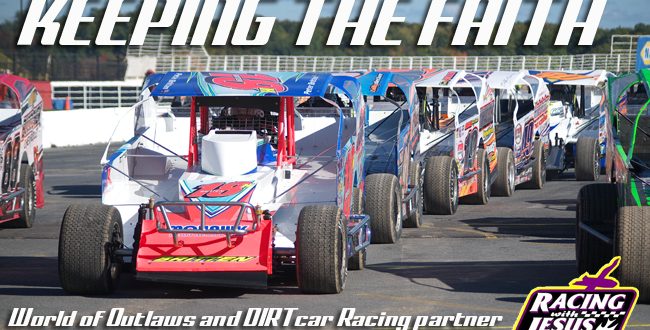 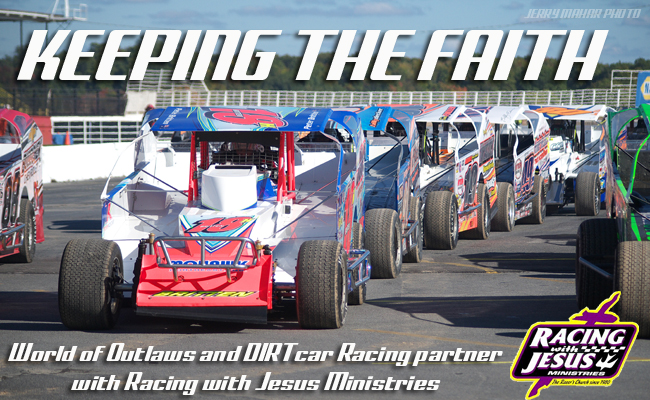 CONCORD, N.C. — Dec. 30, 2016 — Amidst all the race day hoopla, drivers, team members and officials found peace in one place at Thompson (Conn.) Speedway. Under a nearby shade tree, Reverend Pat Evans instilled both belief and the power of God in everyone under the limbs before hot laps. Evans offered guidance through The Word of the Lord, which eventually blossomed into “Racing with Jesus Ministries” in October 1980. Evans nurtured the “Racer’s Church” for 25 years until his passing.

Though, Evans’ vision for the ministry did not grow weary. In 2005, Don Rivers became the new President of Racing with Jesus, hopeful to carry on both the vision of the ministry and the passion for motorsports that Evans left behind. Rivers and Evans met for the first time in 2002 while he was a volunteer in the ministry.

“There were times when tracks wouldn’t let us hold Chapel services,” Rivers said. “We’d have to do it in the parking lot. Pat was someone who wasn’t going to take no for an answer. Pat was adamant about this. Our presence needs to be here. That’s come around to where we have tracks and racing series knocking on our door for support. People are seeing the value in what we do.”

World Racing Group (WRG) and Racing with Jesus Ministries have partnered together to provide Chaplain services to the sanctioning body’s nationally touring series – predominantly the World of Outlaws Craftsman® Sprint Car and Late Model Series, and DIRTcar Racing sanctioned events. Rivers said he is blessed to have the opportunity of “bringing the strength of God to racers.” The operation was exclusively an asphalt service to start.

In 2010, Rivers received a call from WRG with the request to support one of its most prestigious events, Super DIRT Week in Syracuse, N.Y. With sparked interest in dirt track racing, the following February Rivers traveled to Volusia (Fla.) Speedway Park to assist with the three-day thriller of DIRTcar Nationals. Little did he know, a divine gift that would forever change the ministry awaited him.

“It was God’s confirmation that we were supposed to be there,” Rivers said. “Here you have a guy from Montana and a guy from New England meeting at a dirt track in Florida. It’s only something God could put together. He was telling us to expand our horizons and bring people on board to help us out.”

It was at DIRTcar Nationals that Rivers crossed paths with Steven Fowler, who was crewing for a friend at the half-mile course. Fowler had an extensive dirt background, having raced a modified for nearly 16 years and a late model not long before the time he and Rivers first met. Everything began to click for the two when Fowler mentioned he had spent the last 25 years working as a planting missionary; it was the perfect combination.

Soon thereafter, Fowler became the dirt outreach coordinator for the ministry. Where Rivers’ dirt racing knowledge lacked, Fowler could reinforce. They agreed that there may have been some divine intervention, as the two just happened to meet around the time WRG requested the services of the ministry.

“I said, ‘All I know is dirt,’” Fowler said. “He said he knew nothing about it, so we continued to talk. I just saw his Racing with Jesus shirt and thought it was pretty cool. God brought us together at the perfect time.”

It was a mutually rewarding relationship for the two. Essentially, the World of Outlaws solidified Fowler’s dream career. Fowler initially founded Racer’s Baptist Church in Northern Michigan with the goal of starting 1,200 motorsports-centric outreach groups nationwide – the number to cover most of the dirt tracks throughout the country. Though his original initiative has since faded, Fowler is still able live his dream.

“Just to see the needs and hurts of these drivers – especially on tour – of trying to make ends meet, that’s what keeps me going,” Fowler said. “It’s encouraging them, praying for their safety and then as things go on in their lives, being there for them. Hopefully we’ll be able to help them work toward that and to come to know the Lord. To be able to share that with the platform the World of Outlaws gives me is such a privilege.”

While the duo tackles 35,000-plus miles annually with a lean group, Rivers jokingly tells people his “congregation travels at 150 mph and turns left.”

“Pat is dancing, I can tell you that,” Rivers said. “He told us on his deathbed, ‘This can’t die with me. We have to continue.’ He would be ecstatic. That’s what thrives us – his vision. I think he’s looking down, excited on what we’ve done with what he started.”